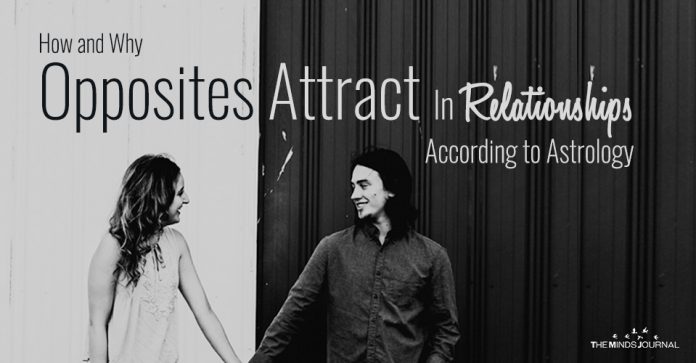 How and Why Opposites Attract In Relationships According to Astrology

The 6 Totally opposite Zodiac Couples, and why they are attracted to each other

We are sure you’ve heard the familiar saying “opposites attract” many times growing up. For some of us this phrase may ring true, while others may find chaos in communicating with an opposite personality. Have you ever wondered why you’re attracted to someone or something you think may never work. Read on to find your opposite match and your inevitable attraction and interaction in a relationship.

The 6 Totally Opposite Zodiac Couples

Read on to find a detail analysis on how each of these couples interact in a relationship.

How and Why Opposites Attract In Relationships

1. The Aries and Libra Couple

Aries is a fire sign, Libra is an air sign, and fire needs air to burn. Aries people are blunt and to the point, making swift decisions, which may not be very well thought out. Libra is ruled by Venus, so they have a harmonious and soothing nature. Since the scales symbolize Libra though, it can take them forever to make up their minds. They think about every little thing from every point of view.

Librans can charm you so easily that you may not even realize what you are agreeing to! They make great lawyers, because they can argue a point for hours and wrap anyone around their little finger. This can make an Aries person crazy. Another possible area of disagreement is that when an Aries person wants something, it can sound like a demand. Are they telling or asking? This attitude can seem rude, pushy, and impulsive. But when these two are under each other’s spell, the Aries will offer that big, open smile, and the Libran will be won over. When an Aries person gets angry, it’s over fast, like a thunderstorm. They are very forgiving.

Aries people understand that Libran decisions are fair and logical, and respect that. Librans hear the word “decision” and they get nervous. Aries just dives in, thinks fast, then handles the situation. Libra wants to play it safe, but that can get boring. So Librans admire the Aries style of just doing what they think should be done and forgetting about it. Since Aries is the fire sign, one would probably think they have the most dangerous temper, right? Well, not really. Think about what air does, as in tornadoes, hurricanes or cyclones. Most people think Venus ruled Librans are always sweet and calm. And most of the time, they are. Just make sure you do not push them too far. You do not want those scales to tip!Both Aries and Libra Want To Be The Leader

Another issue here is that both Aries and Libra are cardinal signs of leadership, meaning they both want their own way. Librans just want to win to achieve justice and peace. Aries wants to win just to prove they are right. They have a bit of an ego to protect. Most partnerships of Aries and Libra will be a great experience for both. What could be better than having an affair with the one who has all the traits you lack? Libras are free thinkers and act on their thoughts, which will make the Aries person feel more confident than they are (they lack confidence, but I didn’t tell you that).

Libran kindness and gentleness will bring out the best in an Aries. The Aries person is more balanced and tolerant when with a Libra person, because their individuality is respected. The Libran may find that they are making more firm decisions, and inspired into higher achievements on a personal level when their Aries love is around. The Aries Ram will try to understand that the Libra needs to conserve energy to maintain balance, they aren’t just lazy. Most people are not as energetic as an Aries, with that Mars rulership.

If the Aries truly tries to see both sides of a disagreement, the Libra will respond with affection and encouragement. A Libra does not like to be crabby or argumentative, but Aries must learn to fight fair. Once the Aries decides not to be unreasonable in their expectations, they will be rewarded with that famous Libra dimple. The Libran is usually right anyway, and Aries can never carry a grudge for long. What argument?

2. The Taurus and Scorpio Couple

Just like all opposites, Taurus and Scorpio both sense that the other has the missing qualities that would make each feel complete and whole. However, both of these signs are fixed signs, and that means stubborn, my friend.

Scorpios are as sexy, secretive and psychic as they are rumored to be, but they hide that all very well when they want. They can be snakes if they act on their lower instincts, or eagles if they soar to their highest. They are boiling cauldrons of emotion, and that can be scary. Scorpios are very sentimental, something that shocks people once they catch on to it. They really know how to hide behind whichever façade they are using, and you will know them for years before you see the sentimentality.

Scorpios are surprisingly gentle with those that they love. But they can go from sweet and gentle to cold and intimidating very quickly. A Taurus person has trouble understanding this, because they are very straight forward, what you see is what you get. Taurus is ruled by Earth, and they are sensible, dependable, patient, and determined. They do not have the Scorpio’s regenerative potential, but they do possess genuine inner calm that a Scorpio longs to have. And Taurus can match Scorpio in the determination department too. But Taurus would love to understand how Scorpio just knows things, in their psychic way.

Both Are Hard Workers, But Scorpio Is Psychic and Knows When To Do What.

Taurus people are hard workers who want security, and if they knew all the things a Scorpio does, that knowledge could be put to good use as they build their lives. But Scorpio wishes they could weather life’s storms as calmly as a Taurus, they could accomplish more that way. So when these two come together and share these virtues, they can change many things for the better. This relationship will be many things, but never boring or bland. Scorpio can be sarcastic when angry, and a Taurus is hurt by that. They think a person can just say what needs to be said, and there is no need to embellish it or try to be mean. Scorpions sting when they are angry though. Taurus just likes to be direct. Although you do not want to upset the Bull too much, they do have a tolerance level that ends at some point.

Both Are Reserved and Will Respect Each Other’s Boundaries.

Taurus people have a great sense of humor, but they can be prone to self-pity. Scorpio has a sense of humor, but does not like to let their vulnerability show. Taurus people make them feel safer. Both of them are reserved people, until you get to know them better. Neither speaks much unless they really have something important to say. They prefer it when people mind their own business. Scorpio will go to great lengths to keep their secrets private, even if they have to lie. A Taurus actually will just tell you to “mind your own business.” They do not turn everything into a drama like Scorpios do.

Both signs are very loyal, especially if it is to each other. When they fall in love and trust each other, these two can move mountains together. They will be possessive of each other, but it’s all kind of cozy and warm, because they know neither will ever let the other go.