6 Practical Tips For Defusing Arguments With Your Partner 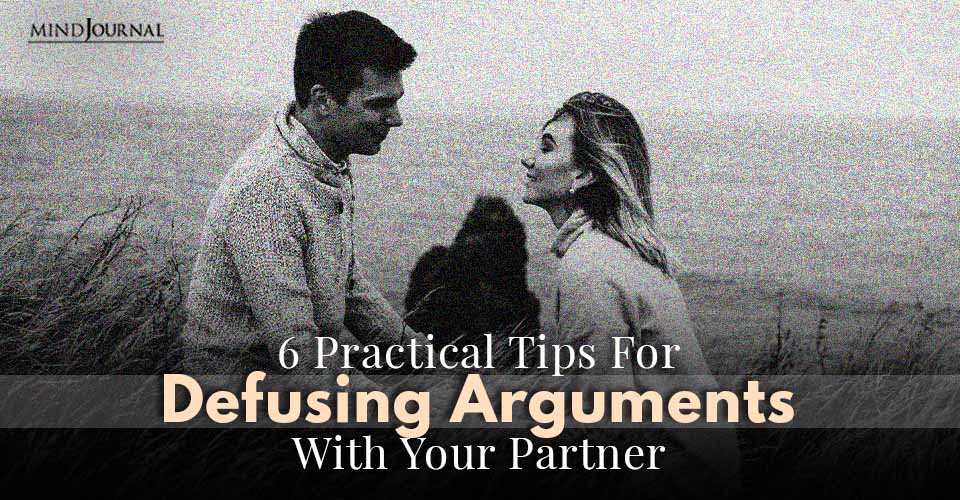 Defusing arguments with your partner in a healthy and mature way is the key to having a satisfying, and emotionally healthy relationship.

Arguments in your relationship are an inevitable part of life. Most of us have heated discussions with those we are closest to us, and that particularly holds true with our partners.

However, while conflicts may sometimes be unavoidable, letting matters get out of hand is not. If you find yourself in a verbal altercation, use these tips to defuse the argument and return you to a place of peace and calm where you can rationally discuss your differences.

Here Are 6 Practical Tips For Defusing Arguments With Your Partner

In most arguments, neither side is completely right or completely wrong. Your partner probably does have a point. If you can learn to see their perspective, you will understand why they are angry or upset. This will allow you to give a little ground and move toward a positive agreement.

Many fights boil down to a misunderstanding. You might not even be arguing about the same thing. Slow down and listen and you may find your differences are less significant than you thought.

Many arguments that should be minor can quickly blow up because both parties let their emotions get the better of them. In the heat of the moment, mean, damaging words can be spoken that will later be deeply regretted. Avoid such mistakes by staying as calm as possible.

Given how hard this often is to do, a good idea is to take a short break from the discussion if you feel your own intensity rising. When you take this break, don’t think about the argument or what you want to say. In fact, do something distracting, relaxing, or stress-reducing before returning to the conversation.

Ideally, all arguments would end with both sides agreeing and walking away happy. In the real world, some differences can’t really be solved. One of the keys to conflict management is learning when to recognize a “lost cause”. If neither of you is going to budge, then humbly end the conversation and move on.

For example, many happily married couples have learned that there are certain topics they should not discuss. Perhaps politics, or the behavior of a relative. It helps if you can accept that some problems in your marriage are not solvable.

An argument about who forgot to take out the trash should not be used as an excuse to belittle your partner’s character. Such contempt (for example, insults, belligerence, eye-rolling), is very dangerous to a long-term relationship and is one of the predictors of divorce.

When you are irritated it is easy for the scope of a fight to broaden, and for the dispute to become a chance for both sides to vent their annoyance on any and all topics. This sort of “kitchen sinking” will just cause more pain and will not help solve the original problem. If you must argue, at least stay focused on the matter at hand. The more the argument centers on specifics, the better the chance for a peaceful outcome.

People are searching every day for answers to life's challenges and problems, especially when the problem involves love and relationships. It's really hard to be objective or stay accountable and that's when a helping professional like me steps in and provides valuable help. I have assisted countless clients to heal their relationships, solve their problems and reach their potential. Let me help you get a new perspective on things. I can help you stop repeating unhealthy dating and relationship patterns and I can also help you and your partner together to stop fighting and grow your emotional and physical connection. I encourage you to view my official author website or my South Florida based psychotherapy practice website for full details about me and my practice. I am able to offer services face-to-face or online anywhere in the world! Check out my self-help book titled, Ghosted and Breadcrumbed: Stop Falling for Unavailable Men and Get Smart About Healthy Relationships.View Author posts