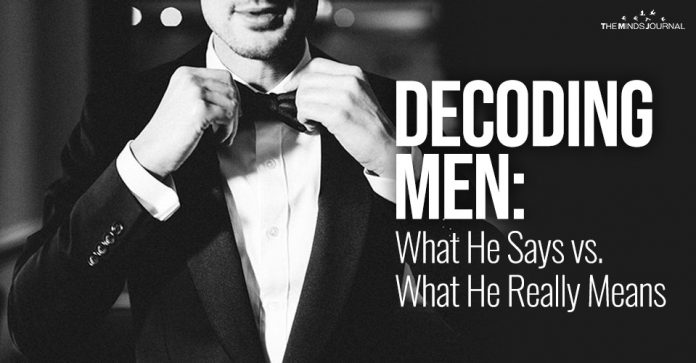 Decoding Men: What He Says vs. What He Really Means

It seems to be the age-old mystery: what does he really mean when he says certain things? And why do men seem to have this whole other language that we women just can’t quite understand?

John Grey shed some light on this phenomenon in his infamous book Men Are from Mars and Women Are from Venus, but now that dating has gone digital surely the rules have changed?

There seems to be this constant communication breakdown between the sexes, resulting in frustration, bad dates and a whole lot of heartache. So to help the ladies with some basic ‘manslation’.

Here’s a list of common things a man says and what he really means.

What he means: I want to take you to bed or get physical with you and am not necessarily offering anything serious at the moment.

What he means: I really like you, you have my attention.

“I think you’re really nice, but…”

What he means: I’m not interested in anything right now.

“You have a great personality, but …”

What he means: I’m not interested in or attracted to you. (Basically, if there’s a ‘BUT’ after any sentence it’s a good indication he isn’t after anything serious.)

What he means: If he’s just sending one-word lines with no questions after or only short non -committal answers then the guy is not 100% committed to getting to know you. Move on.

What he means: I want something casual and can’t be bothered to ask you on a formal date. He’s most likely keeping his options open.

What he means: It’s possible he is genuinely busy, however, if he is serious about seeing you again he will organize and lock in a time with you. Otherwise, this is just an excuse not to make you a priority because he isn’t wanting more.

What he means: It is most definitely him. Either he doesn’t want to hurt your feelings or face the music.

“I just need some space”

What he means: This could mean one of two things – either he needs some time to think a few things over or he isn’t interested in committing.

What he means: We all know what this means and where it leads to.

“Do you want to come back to mine for a drink?”

What he means: Do you want to possibly make out with me on my couch?

“I would love to see you again”

What he means:  He actually really wants to see you again.

“What are you wearing?”

What he means: He pretty much wants to know if you are naked. Most of the time he wants a visual image because he has one thing on his mind.

What he means: I don’t want to admit my faults or weaknesses.

“I’m just not after anything serious”

What he means: I don’t want a commitment right now, but I’ll take the casual part!

What he means: He is noticing the details…

“You have beautiful eyes”

What he means: He is attracted to you and probably wants to kiss you.

“Do you want to go somewhere casual?”

What he means: He doesn’t want to get too serious yet until he gets to know you.

“Sorry, have to raincheck. Super busy. Will try to catch you another time”

What he means: If he hasn’t bothered to call you to cancel plans or locked in another time then this guy isn’t prioritising you, probably because he doesn’t want anything serious.

Renee Slanskyhttp://www.TheDatingDirectory.co
Renee Slansky is an Australian TV presenter, writer, professional blogger and dating and relationship coach, whose purpose and heart for women compelled her to educate people on how to find, build and cultivate healthy and fulfilling relationships. Her own blog www.thedatingdirectory.co is now the number 1 dating and relationship blog in Australia. Renee contributes advice regularly to some of the biggest online dating sites and publications globally including The Huffington Post, E Harmony, Plenty of Fish, Your Tango, MamaMia, The Good Men Project, The Love Destination and Yahoo 7. As a professional coach, Renee has built online programmes for women and mentors both men and women around the world. She is often called to comment as an expert for on the radio and Channel 7's The Morning Show and Sunrise and speaks at events. Her mission to educate a generation, change the dating culture and lower the divorce rate.
-Adverts-

How will you know if he's attracted to you or just "using" you to objectify you?
Read more
Understanding Men

Some of the latest research suggests that feeling sexually desired might actually be quite important to men's sexuality too - it's just that a lot of us don't tend to talk about it.
Read more
Understanding Men

One of the most challenging, and often invisible, themes that keep people from progressing in their relationships (and their lives) is their unprocessed anger with the opposite sex.
Read more
wpDiscuz
0
0
Would love your thoughts, please comment.x
()
x
| Reply