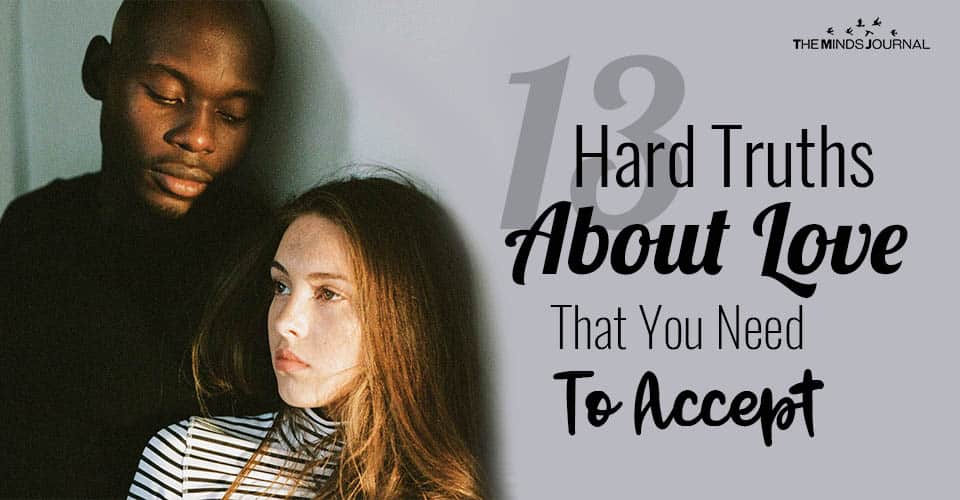 Everyone wants to have true love in their lives, but how many do actually get it? Love can be a very beautiful thing, but it can also be very fickle sometimes. Some people get painfully hurt because they tend to ignore a few hard truths about love, accepting which can help them actually find true love.

1. When someone says they don’t want to be in a relationship, believe them.

If someone insinuates anything along the lines of not being able or ready to date, or that they can’t date “someone” because of X, Y, and/or Z reasons – all things you check the box for – they are most likely politely telling you they can’t date you. Alternatives: “I’m not interested in anything serious right now, ” “I am not emotionally available,” etc.

2. Just because you’re not playing games, it doesn’t mean other people aren’t.

When it comes to dating, the best of us practice the golden rule: treat people how you want to be treated. But we have to accept that practicing the golden rule on others, does not mean receiving the same courtesy.

Some people ghost, some people toy with your feelings, some people keep you in an emotional purgatory, and the list goes on and on. Such is life. You have to hold onto your principles even when they don’t get you the same treatment in return.

Want to know more about some truths of love that you need to accept? Read If You Want Real Love, You Have To Accept These 3 Unsexy Truths about love

3. Timing can be a cop-out, but it can also be a very real restraint.

A friend once said something about timing that gave me pause: timing is more important than whether you and your love interest like each other. Yikes. The thought of that is really disheartening. The truth is the timing does matter, but so does trying despite the timing. You must be willing to acknowledge what kind of timing issue you face.

4. The sooner you can accept how you feel about someone, the sooner you’ll know what to do about it.

You can dance around your feelings all you want, but sooner or later, it catches up with you. You can also rationalize, argue, and try to talk yourself out of how you feel, but all of that is mostly futile.

Feelings can be a fleeting thing, and I certainly don’t think they should always be acted upon. But being honest with yourself comes first, the rightness or wrongness, or action or inaction, comes second.

5. You will always love or really, really like some people, even if they don’t “deserve” it.

Is there anything worse than falling for a person who is terrible (for you)? Whether love is a choice or not, is a question we will never be able to answer for certain. What is a choice, however, is who you choose to be with, assuming, of course, they also choose you.

Whether they are ones who got away, or lifetime crushes, or shoulda-coulda-wouldas, a little part of us will always carry some people with us. Is that weird or is it just human?

6. Rebounds and distractions don’t solve the problem, they extend the length of time it takes for you to move on.

I’ll openly admit I’ve never liked the idea of “rebounds” or the like. Only because it makes me feel uneasy like one human is being used to ease another’s pain. Maybe it’s not so simple, and maybe both parties know what they’re doing.

But I’ve found that the process of healing from heartbreak in all its forms, is something you have to face. And the sooner you face it directly, the better.

7. You can meet the perfect person, but they can still not be “ready” for you.

This goes along with timing, except it’s not so much that the stars don’t align for both parties, as it is they may not want to make the sacrifice to be with you right now, for whatever reason. Still, it’s not a good idea to wait around for the person, because some people will never be ready for you.

8. If it’s really hard in the beginning, it’s not going to get any easier.

Good movies and great literature convince us that having to overcome difficult things to be with someone, is a sign that you’re meant to be together. More often than not, it seems that the exact opposite is true. This is not to say you don’t have to put in any work, but it is worth it to be weary of things that feel more like work than they should be, especially at the beginning.

9. Your heartbreak is not uncommon, it’s actually quite ordinary.

And you will heal, even if you don’t want to. (Sometimes you won’t want to.) Too many people romanticize heartbreak, when there’s very little that’s romantic about it. Still, one day you listen to the pains and hurts of others as you consider your own, and you realize in a weird way, that you’re all in this together.

10. You can change your hair, your face, your job, your city, etc. but if you’re not okay with you, a relationship isn’t going to fix that.

It might even magnify all the ways in which you’re insecure. In the end, putting the burden on something or someone else to “fix” you is too great an ask. Finding someone who loves and accepts you is an amazing experience, but doing that for yourself is just as important.

11. You can’t change anybody but yourself in a relationship.

And you shouldn’t go into one expecting that you will. You have to accept the person that you’re within all their flaws, and if you can’t, you should let them go. Because it may mean that you don’t want them; you want the version of them you’ve created in your head, and truth be told, that is entirely unfair.

12. Sometimes you might be single for any of the many reasons people are single.

Sometimes you are single for no reason at all. Sometimes being single feels like a blessing, and sometimes it feels like a punishment. You can lose your mind wondering why you’re single. And there is absolutely nothing wrong with saying that you want to be in a relationship.

But ultimately, it’s always best to know what you’re willing to sacrifice to be in a relationship, and what you aren’t.

13. Your love story much like your life story is going to be different from everyone else’s.

Everybody has something to say about love and the lessons they’ve learned. (The irony of stating this is not lost on me.) Be willing to listen and take what makes sense to you – even the difficult lessons. But don’t define your love and your love story by the stories of other people.

You’re not entirely in charge of all the details, but when it comes to the love(s) in your life, you should have the courage to put your own pen to paper.

Finding true love takes time and a lot of patience, and trying to rush it can never yield good results. So, wait for some time, and love will find you when you will least expect it.

If you want to know more about the hard truths about love, then check out this video below:

Hi. I am a content creator by profession and I work mostly with psychology and relationship based content. I love to read, cook and try new things.View Author posts