5 Things To Do When Boundaries Are Crossed In Marriage 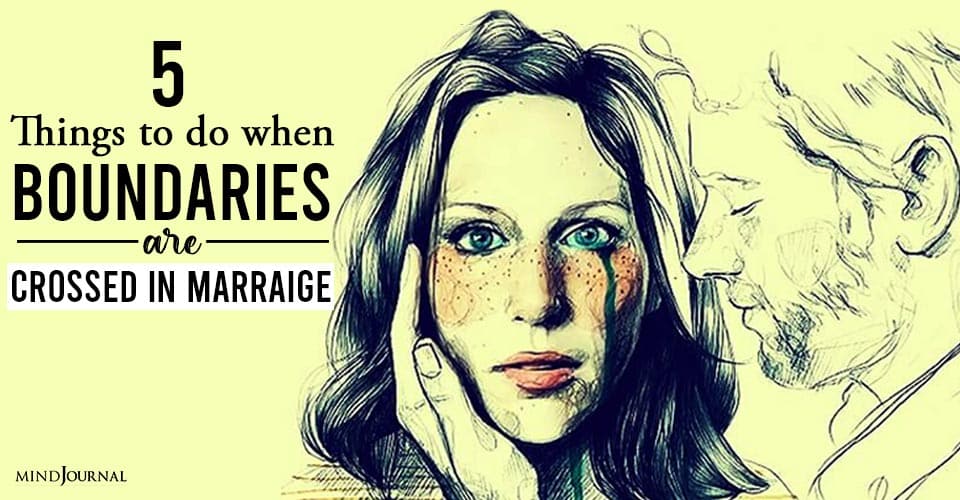 How? Let me help.

A client’s husband had violated their ‘no mid-week drinking’ boundary. They had both realized that when they drank wine after work their parenting skills around bedtime suffered. So, they agreed to abstain. When her husband came home one night smelling of beer, she was very upset because they had an agreement and he had broken it.

Her husband pushed back at first, justifying his behavior, but then he acknowledged that he had violated their agreement. With that mutual understanding, their healing could begin.

Related: Setting Boundaries That are Clear and Well-Expressed

An essential part of healing when boundaries are crossed in marriage is conversation.

I believe that conversation is essential to any healthy relationship and when boundaries have been crossed especially so.

For my client and her husband, it was very important that they revisit why they had set the boundary in the first place, why he had crossed the boundary and what next steps they should take around the boundary.

They agreed that the boundary had been set in place for the sake of their children. He explained that he drank because he had a work dinner and he wanted to make his client feel comfortable but knew that he had crossed their established boundary nonetheless. She expressed her disappointment in the fact that he hadn’t kept his word and that he had been a little bit out of it during the kids’ bedtime routine.

Each of them were able to speak their piece, know they had been heard, and get ready to take steps for figuring out a resolution. So, a key part of surviving boundaries being crossed in marriage is talking about it! Without conversation, moving forward is impossible.

Once my client and her husband had spoken their piece, they set out to figure out what they should do about the existing boundary. Did they feel like it was a boundary they should maintain or one that needed reconsideration? They wanted to make sure that both of them felt comfortable with the boundary because they knew that a healthy marriage was based on mutually agreed-upon boundaries.

After some discussion, they agreed that the boundary was important and that it should stay in place and that, if another work dinner arose, they would address that situation when it came.

It is important, when trying to figure how to fix things when boundaries are crossed in marriage, to work together to identify what can be done to come to terms with what was done, and to make a plan for moving forward.

After conversation and resolution, the next step to managing boundaries is by setting benchmarks.

Benchmarks are a point of reference against which other things are compared. Setting benchmarks is an important part of moving forward.

For my clients, their benchmark was how effective the no mid-week drinking boundary was. They defined what they wanted to achieve by setting this boundary (a more peaceful dinner and bedtime routine). When that boundary was violated, they looked carefully at what kind of effect the violation had on their family. They realized that it did make things more difficult and they agreed to pay attention going forward to how to make bed time better.