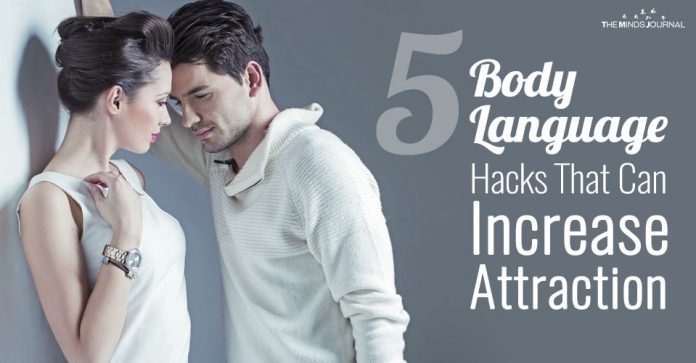 How can you use body language to attract people around you? 5 Body Language Hacks That Can Increase Attraction and make you more desirable

When it comes to attraction, what do you see first? How does the other person look? What are they wearing? How do they converse with you? However, it is not always about the other person; you need to be aware of how YOU are coming across to them. What kind of vibe are you giving off? Are you radiating confidence? Your body language will go a long way in deciding your future with the person you are attracted to, so focusing on that is crucial.

How you are making the other person feel in your presence is crucial, and that is where your body language comes into play.

Knowing the vibe you’re giving off means you can control your communication and the conversation.

Body language is one of the most important aspects of attraction, but it’s one that we frequently end up neglecting. People continually underestimate the power of non-verbal communication by focusing strictly on surface aspects. Non-verbal communication isn’t just about making sure we’re not inadvertently telling people to go away or trying to read people’s minds.

No, the strength in body language and non-verbal communication is in how much it controls whether or not people are attracted to us. Most people are utterly unaware of the messages that they’re sending out or the impact that they have on others; it’s like having a conversation with a Markov chatbot tied to the horse_ebooks Twitter account.  You might get the right message across by accident but half the time you’re sending out more nonsensical word salad than a Freshman English major who just discovered Allan Ginsberg.

“A good stance and posture reflect a proper state of mind.” – Morihei Ueshiba

If, on the other hand, you’re aware of just what messages you’re sending, then you’re able to control and direct the conversation… and even affect how people feel about you. There are surprisingly simple body language hacks that can make the difference between being forgettable and having a magnetic connection. Despite what many of us think, our brains are very bad at understanding why we feel the way we do. More often than not, our brains are just feeling the sensations given to us by our bodies and rationalize the reasons for feeling that way after the fact. When you’re conscious of this process, you can actually use body language to increase attraction and rapport. Keep this in mind; we’ll be returning to this idea a few times.

This first trick is part of ancient and sacred art that I like to call “Getting The Hell Out of Your Own Way.”

One mistake that people make all the time is treating meeting new people as though it were some hellish challenge that can only be overcome by passing several charisma checks, finding the Unholy Grail and answering the Riddles Three.

Now, in fairness, humans have survived as long as we have because we’re a communal species. We form social groups on the macro and micro level and we prioritize the well-being of our “tribe” because we know it helps us in the long run. As a result, we’re always wary around people who are from outside of our “tribe”, because we’re on the lookout for freeloaders who’ll weaken our group by taking from it without giving in return. But at the same time, most people are willing to give folks a chance and assume the best, provided they’re sending the right kinds of signals. People who come in defensively, or acting like they have to fight their way up from “pre-rejected”, are naturally off-putting; everything about their body language reads as “off” or “up to something”.

“What you do speaks so loud that I cannot hear what you say.” – Ralph Waldo Emerson

Assuming that you’re already friends, on the other hand, forces you to relax. We naturally behave differently around people we’re comfortable with. We aren’t as tense, our body language is more open, our way of speaking is warmer and friendlier… and people almost instinctively respond to that warmth. It becomes a self-fulfilling prophecy: believe that they like you and they will like you.

Neuroscientists claim that running changes our brain and affects how we think and what we feel. Science confirms that running every day for 30 minutes is enough to reap amazing brain benefits.
Read more
Dating

Are you someone who is their 50s, and wondering about the dating scene? Dating in your 50s is not as intimidating as it actually seems.
Read more
wpDiscuz
0
0
Would love your thoughts, please comment.x
()
x
| Reply