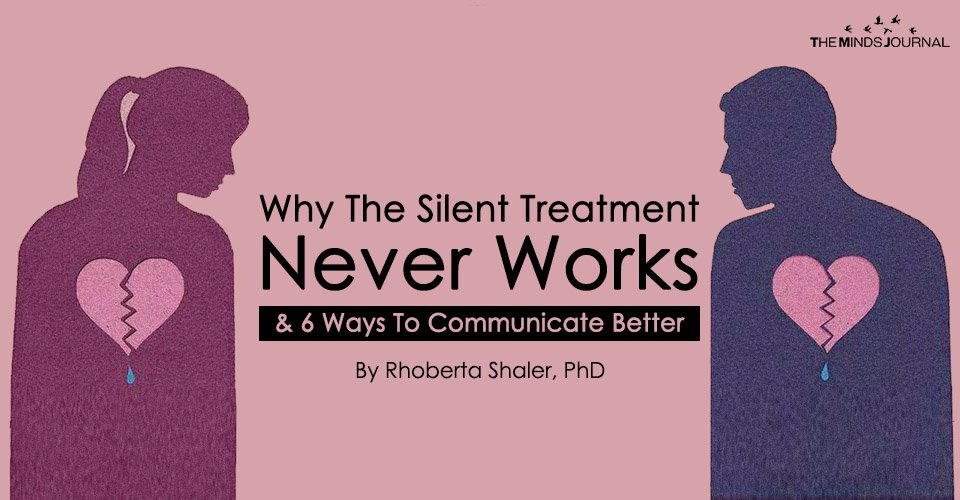 Your silence says more than you realize. And everything it says is hurtful.

Does your partner just stop talking to you when you have a dispute, or when you do something he or she isn’t happy about? How is that working out for your relationship? When your partner gives you “the silent treatment” to show disapproval, they’re broadcasting so much more about themselves.

But is there a reason why partners do this to each other?

And you have a part in all that, too. Apparently, you two didn’t learn how to communicate better, especially when things don’t go well. Always look at your part first when troubles arise; don’t resort to blaming as your default.

A man in my anger management class asked me, “How long does ‘the silent treatment’ usually last?” Interesting question, as I just taught how the cold shoulder is one step toward escalating anger and violence, and he really sat up and took notice.

I asked him, “So how long does your wife go without speaking to you?”

“Oh, that’s the more than the cold shoulder AND the silent treatment. That’s being frozen out completely.”

He needed to know that this was probably because she did not know how to communicate better about difficult things. She may feel afraid to bring things up because it previously didn’t go well with him. Or, she learned to bottle things up when she was still at home with her family, and now doesn’t trust that things with him will turn out any differently.

I suggested that she probably wanted to talk with him, but needed to feel very safe doing it. She probably longs for real partnership and feels very cheated that she can’t safely share her feelings with him. That would be a good thing to talk about very soon.

Was that their issue? Did he want to listen? Was he able to really listen? Or, was he afraid of hearing that he was failing in some areas and that possibility scares him?

It’s common for folks to get scared, and then get very defensive. That often even escalates into anger.

It’s very touchy. People can react in out-of-proportion ways when they feel that someone is attacking their self-worth, but it’s likely that’s not what’s going on at all.

One couple I worked with finally admitted — not easily — that no matter how gently the husband tried to bring up things they really needed to talk about, the wife shut him down and made him wrong. She could not tolerate the idea that there was anything wrong with her, her approach, or her style.

It scared her to her core to think she was still thought of as not good enough. She lived with that her whole life. So, when her husband wanted to resolve things, she took it as a personal blow and reacted with verbal violence. She shut down so she didn’t have to risk.

Her husband decided to suffer in silence. Finally, he could not. It wasn’t until it was clear she was losing him that she was willing to work towards real communication. That took work, but we made it.

Here are a few ways to communicate effectively without using the silent treatment:

1. Calm down before speaking about the issue.
2. Ask for time to talk about what you are feeling, without interruption or debate.
3. Be willing to listen to your partner, without judgment or defensiveness.
4. Take responsibility for your feelings and refrain from blaming your partner for them.
5. Ask for what you want from your partner.
6. Be willing to hear “yes” or “no.” There are no “have to’s” in relationships.

That sounds peaceful, right? It sounds grown-up, and that’s exactly right. Real grown-ups have conversations that solve problems; kids fight and take their toys and go home. The silent treatment is the adult version.

Grown-ups talk things through, learn about each other, and make mutual, positive decisions about their relationship. That takes skills. The good news is that those skills are learnable.

The Relationship Help Doctor
Relationship Consultant. Mediator. Speaker.
Urgent & Ongoing Care for Relationships in Crisis…including the one with yourself.

There Are Two Views to Every Conflict and Both Are Valid

7 Ways to Improve Your Relationship