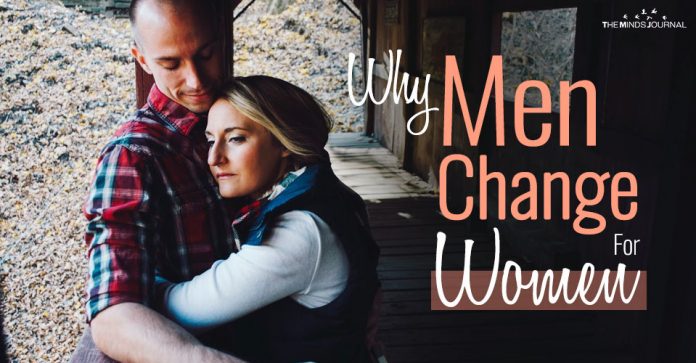 “Why does a woman work ten years to change a man, then complain he’s not the man she married?” – Barbra Streisand

It’s not always a bad thing to change yourself for the woman you love. And by ‘change’, I mean ‘improve’.

When you start getting rid of certain bad habits and focus on being more responsible and understanding to create a lasting relationship with a special someone, it can actually help you become a better person. However, most of the times we tend to change ourselves completely just to impress the girl we like, even though may not want to. And this is what turns you from a high value man to a low value person which leads to a toxic relationship and eventually to a breakup.

Understanding yourself and creating your identity is crucial for becoming a high value individual. Being confident and improving your self-esteem are the core ingredients for a happy romantic relationship.

Having higher levels of self-worth makes you love yourself first and then your partner.

It doesn’t mean that you will neglect her. It simply means that you value yourself too much to tolerate any manipulation or disrespect. The sense of self-respect and self-worth makes a romantic relationship loving and healthy. High-value women want high-value men. Yet some men tend to forget that just to ‘get the girl’. But getting a girl and keeping her are very different challenges.

Men who have low self-esteem tend to perceive themselves with low value. They lack strong core values because they are constantly seeking approval. These are the kind of men who struggle to maintain the status quo. They feel the need to meet everyone else’s metric in order to feel valued. They believe that without acceptance, there is no value.

The inferiority gap is a relationship killer

“It’s a real man who can go out with a woman who’s taller than he is. That’s an alpha male right there.” – Miranda Hart

Being an alpha male is not about your size or strength. It’s about your confidence and mindset. When one lacks the belief that they are high value, it creates an inferiority gap. This sets the values of others on a pedestal and deeming them more important. As a result, these guys are liable to get run over by others.

When one feels like they are low value, they’re likely to base their feelings of success and worthiness on how well they meet the needs of others, instead of their own. Even though the entire idea of it is to gain others’ approval, this needy behavior actually repels others. Not to mention that it invites all sorts of problems into one’s life. 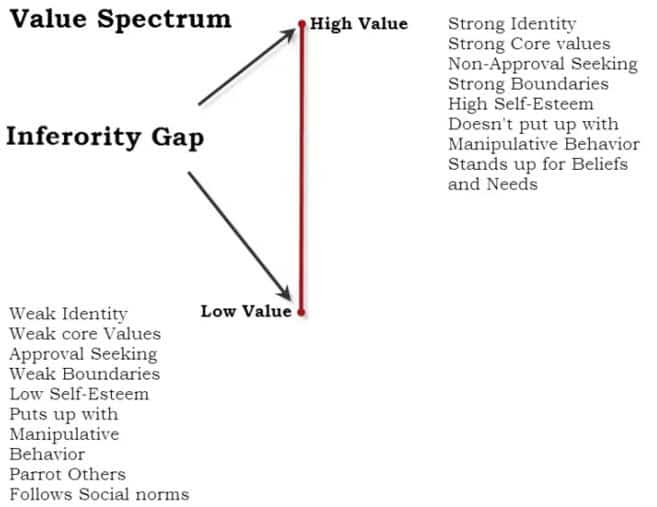 My first relationship after graduating from college was with Kathy(1) who was uncomfortably close with her ex-boyfriend. It bothered me that they texted so much, but I overlooked it because she was stunningly beautiful and very sexual. Her beauty leads me to create a halo effect;(2) I perceived her as more valuable than myself, despite the behavior that I found unattractive.

As a result, she walked all over me. She took vacations with her ex-boyfriend while explaining that it meant nothing when I expressed how much it frustrated me. Regardless, I stuck with an unfulfilled relationship for a good year and a half. After we broke up, I then stayed as “friends with benefits” for another year after that. She got what she wanted, but I didn’t. It created anxiety, self-doubt, and insecurities.

“I’m independent. If a guy is too clingy or needy, I actually get afraid of hurting him – and I can’t deal with that.” – Ashley Greene

Kyle Bensonhttp://kylebenson.net/healthy-relationships
I've had the privilege of working with men and women on a wide range of relationship issues. I've helped individuals:Leave toxic relationships to find a healthy relationship that makes them feel calm, grateful for the person in their life, and deeply valued by their partner Close the emotional distance between partners so they feel deeply connected to each otherResolve relationship conflict, leading the couple to become closer and more loving than they ever thought imaginable Remove sexual anxiety to create intensely passionate and longer-lasting sexUse problems in the relationship as catalysts to help individuals grow into their highest potential (and become more awesome lovers)Our coaching sessions are tailored towards reaching solutions that improve your relationship quickly. Read more about my coaching programmes here, Relationship Coaching or Email me at [email protected]net
-Adverts-

Many women do abandon themselves because of hidden insecurity – they feel as though they should be someone better, someone, their partner will like more.
Read more
Mental Health

Are you feeling lonely? Do you feel lonely even when you’re not alone? Even if you do, there’s no need to worry or get alarmed. Truth is you are not alone in feeling lonely. Loneliness is a Universal Problem and it’s perfectly natural and normal to feel this way from time to time.
Read more
Romantic Relationship

Did you know that nonverbal cues can clearly give you a hint, whether the person you like is actually interested in you or not?
Read more
wpDiscuz
0
0
Would love your thoughts, please comment.x
()
x
| Reply