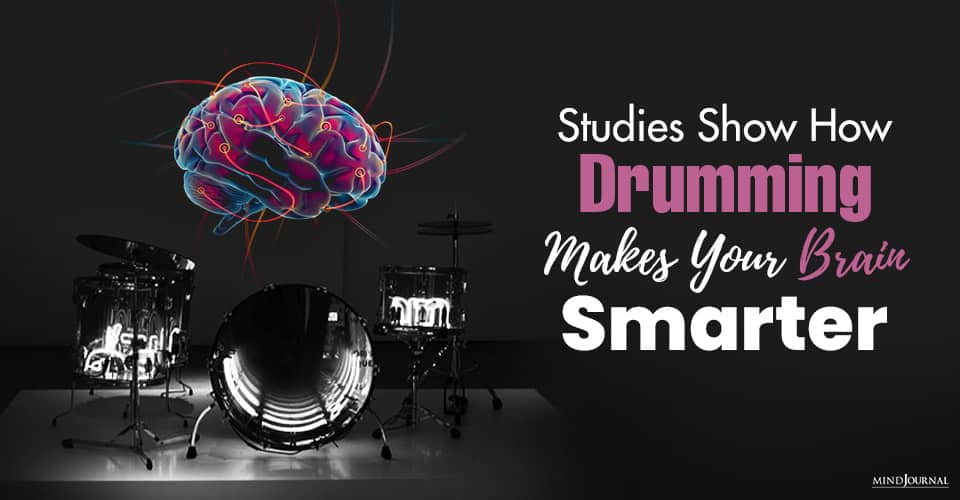 A lot of research has been done on the positive brain effects of playing musical instruments, but no one had previously looked specifically into drummers. The neuroscience of drumming shows that playing the drums changes brain structure and function making you way smarter than unmusical people.

An old dumb drummer joke goes – “there are three kinds of drummers in the world—those who can count and those who can’t.” There are a lot of bad drummer jokes across the world, but neuroscience and psychology studies on drummers’ brain, disapprove a host of these jokes. Read on to know how drumming makes you smarter..

According to 2019 research (conducted at Ruhr-University Bochum)  by Dr. Lara Schlaffke and Associate Professor Dr. Sebastian Ocklenburg – people who play the drums regularly for years have different brain structure and function when compared to unmusical people.

The study results revealed that drummers have fewer, but thicker fibres in the main connecting tract between the two halves of the brain. Also, their motor brain areas are organised more efficiently. As per MRI scans brains of drummers showed fewer activations during a motor task than those of non-musical controls participants.

In the above image, see Scan A is showing the amount of CHANGE in stimulation from the cerebellum between the highest and lowest points of the graph, or the least and the most experienced drummers. On the graph, the Y-axis represents stimulation (don’t worry about the actual numbers), while the X-axis is time (averaged years of drumming). Look at the decrease in brain activity (stimulation recorded in the fMRI scan) over the span of years of experience! The longer you drum, the lesser your brain activity in the cerebellum.

In Scans B, on the lower half of the graph. Both images are showing brain activity in the basal ganglia and pons for novice drummers. The image on the left, T1, are scans taken after 1 day of motor training (teaching your body the motions). Brain activity is relatively high. The image on the right, T5, are scans taken after just 28 days of motor training in the same individuals. Note the significant decrease in brain activity. (Petrini et al. 2011)

Unlike previous studies that showed how playing musical instruments for years leads to changes in the gray matter, perception, memory, decision making and speech, this 2019 study focused on the changes in the white matter (which contains tracts of fibres that connect distant brain areas).

It is an undeniable fact that the motor coordination of professional drummers far surpasses those of untrained individuals.

In a Swedish study (Karolinska Institutet in Stockholm), participants were asked to keep steady time with a drumstick and then take an intelligence test. Those who scored high in intelligence test were found to have better rhythm.

According to the research results,  there is a link between intelligence, good timing and problem-solving. The researchers conclude that those with high natural intellect are better at keeping time. Also, Gary Cleland puts it in The Telegraph, drummers “might actually be natural intellectuals.”

Another study figured out that drummers have high self-control. During the study, drummers who performed well on rhythm tests could also better understand speech in noisy settings. It is easy for drummers to deal with conflicting thoughts like blocking out distractions and controlling responses.

Neuroscientist David Eagleman conducted an experiment with various professional drummers at Brian Eno’s studio. Eno theorized that drummers have unique mental makeup and it turned to be true.

Eagleman’s test revealed that there was a big difference between the drummers’ timing and that of test subjects. The brain anatomy of drummers is different and their ability to keep time gives them an intuitive understanding of the rhythmic patterns they perceive all around them. Drumming makes your brain more efficient and smarter.

Drumming offers loads of emotional and physical benefits collectively known as “drummer’s high.” It is an endorphin rush that is seen more when playing music, not simply listening to it.

This endorphin-filled act of drumming evokes positive emotions and motivates people to work together and cooperate with each other according to Oxford psychologists. Also, Clash drummer Topper Headon said in BBC interview that drumming has a therapeutic value.

Drummers are not only smarter but more athletic than non-drummers

A long-term study investigated the drumming effects on the body and concluded that rock/pop drumming is as physically demanding as running, jogging or cycling or playing volleyball.