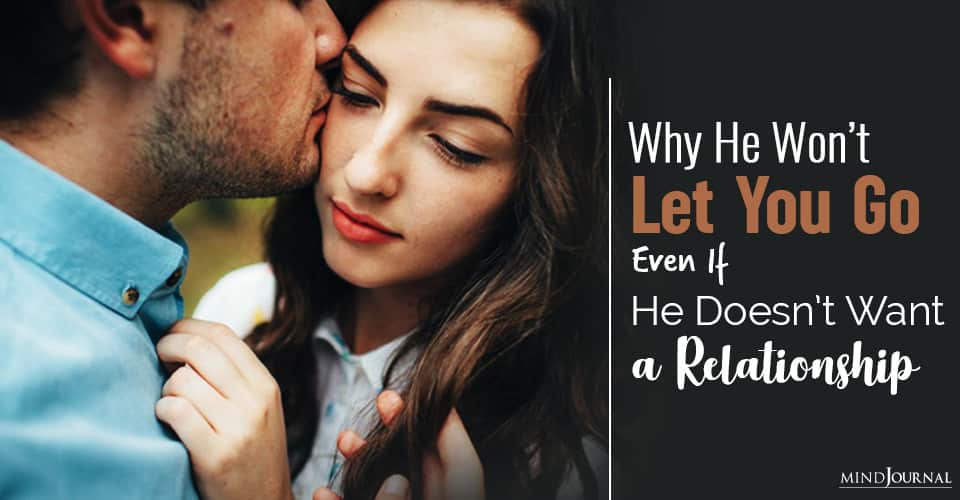 Sometimes, men are commitment phobic and do not want to get committed, also do not want to lose her at the same time. Are you in one of those confusing situations where the guy you love is not letting you go, despite not wanting a relationship with you?

Are you dating a guy and wondering why he won’t let you go even if he doesn’t want a relationship?

Does he tell you that it’s over and walk out only to return a few days or weeks later, smiling and charming?

Are these things happening over and over, leaving you confused and unhappy?

So, why does your guy keep doing this, even if he knows it hurts you? It’s not a simple answer.

It is the human condition to want to be part of a pair. Being alone is, for many of us, not a comfortable place.

If your guy tells you that he doesn’t want to be in a relationship with you, but won’t let you go, then it is possible that he is simply lonely.

He knows that he doesn’t want to be with you but, because he is unable to fill the space that is left in your absence, he keeps coming back so that he won’t be alone.

And you probably let him come back because you aren’t enjoying being alone either.

A guy who says he doesn’t love you but keeps coming back is a guy who is most likely very insecure.

A guy who is insecure is not clear in his decisions. He says he doesn’t love you but he then wavers, wondering if he’s made the right choice. Perhaps he won’t let you go hoping that things could be different. He is constantly second-guessing himself and pulling you into it.

Guys who are secure are more definitive in their decisions and more apt to follow through on them. The guy who is secure will make his decision and move forward.

Furthermore, a guy who keeps you on a string could be a guy who feels insecure about his place in the world. Not being in a couple could make him feel unsafe and unwanted. The idea of trying to find another person to date might be just too overwhelming and, as a result, he comes back to you, hoping to make it work so that he can feel better about himself.

Is your guy insecure? If yes, that could be a big reason why he keeps you around.

This will be no surprise to any of you – guys want and need, to have sex.

When your guy says he doesn’t want to be in a relationship with you but keeps coming back he could very well be coming back just for the sex.

I have a client who wanted a divorce from his wife and he moved out. In spite of this, he regularly had sex with her. I asked him why and he said ‘Why would I not take any opportunity to have sex?’