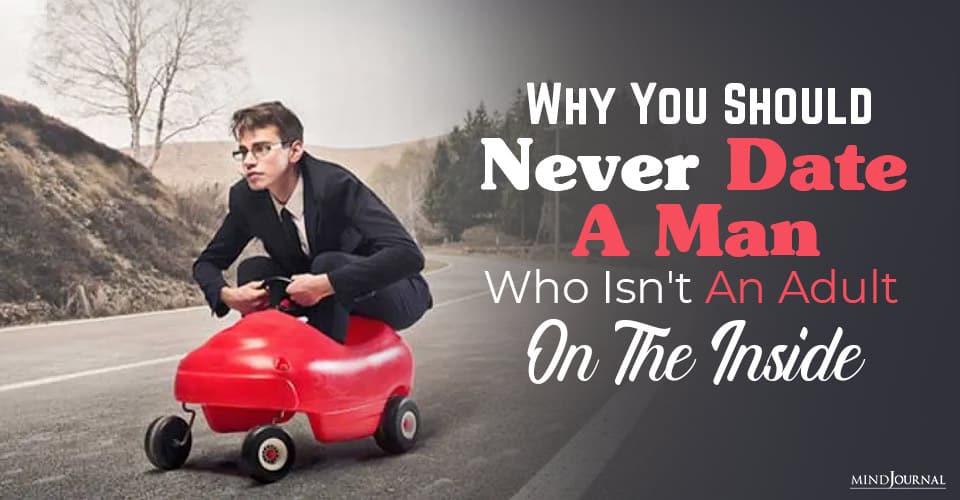 Remember that last guy? The one who actually and totally looked like a grown-up but actually and totally was not? You know, tall, dark, and handsome… and like a child on the inside? He was willing, able, and eager to have sex but what he really seemed to want was a mommy to take care of him.

Remember that guy? And (yikes!) remember how, for a hot minute, you totally turned into his mom? There you were, reminding him of every little thing, explaining to him why he couldn’t let his emotions rule his behavior, feeling scared at the way he let his impulses drive everything from his road rage to his money management to his failure to be responsible about, well, nearly everything. You probably scolded him too, didn’t you? Bad mommy.

Theoretically, you’d think it would be kind of easy, this relationship stuff. But by now we all know better and, if you don’t yet know better, oh have you got some catchin’ up to do. Yes, we’re a social species and yes, we’re hardwired for falling in love, and yes we (mostly) all like sex… so what could possibly go wrong?

Related: Peter Pan Syndrome: What It Looks Like and How To Deal

As it turns out there are quite a few things that could go wrong. Many of them are unpredictable (like a future psychotic break years after the wedding). But thankfully, most problems in romances are highly predictable when you think about them. So, please, take a minute and just think about this series, “Never Date a Man Who….” So far we’ve gone over three kinds of guys no woman in her right mind would keep dating.

First, A Man Who Can’t Talk About Sex. Why not him? Because adult romantic relationships naturally include sex. It’s a legit part of the relationship and it will require some conversations here and there overtime to figure out who we are (as individuals), what we like (as a couple), and the skills to address issues that come up.

Second, you are strongly advised to Never Date a Man Who Can’t Embrace Equality. I know, I know, sounds political but, really, isn’t the concept of two of you being of equal worth sort of what you have in mind for your future together? It’s implied, right? Equality does, after all, offer the only realistic remedy for loneliness.

Third (and it’s amazing we have to talk about this), Never Date a Man Who Can’t Commit to an Abuse-Free Relationship with you. We’re not talking here about a committed relationship in the colloquial sense of marriage or cohabitation or even just “goin’ steady,” but a commitment nonetheless.

We may argue, we may fight about things—but our commitment is that we will never engage in guilt trips, yelling, name-calling, or even a demeaning tone of voice. Respect: not too much to ask for from someone who’s auditioning for a leading role in your life. With romance as with baseball, when we think of home we think of a place where we can be safe. Who would ever want less?

But men who aren’t grown-ups? How many can there actually be? Judging from my caseload over the last few decades, the answer would be, “More than you might think.” Think about it. If you’ve dated a bit (and no one here is slut-shaming), you’ve met some of these guys. They might have been interesting and fun for a minute before you came to realize that you’re the only adult in the room.

A Marriage and Family Therapist for 30 years, Steven helps people figure out how they too can have healthy sexuality and intimacy. He has written the book on human sexual needs, We’re All Like This (2015, Giant Publishing), used in university-level human sexuality classes. Steven is the creator and host of the true crime podcast, Sex Crime Central. He is also a contributor to Huffington Post, The Advocate, SheKnows.com, The Rage Monthly, Adelante Magazine and Gannett newspapers. A published author, TEDx Talk presenter (“What’s Your Magic Sex Number?”), and a podcast guest who talks about sexuality in a way that won't embarrass you.View Author posts