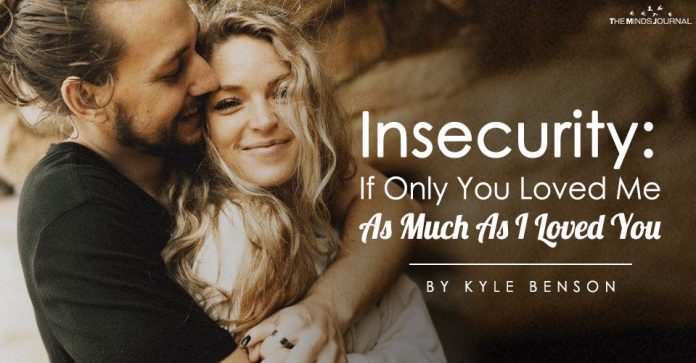 Insecurity: If Only You Loved Me As Much As I Loved You

Much of what we do in love happens without thinking.

Meet Katrina and Kevin. They’ve been married for 7 years, and have two little girls.

When asked about their relationship problems, Katrina starts first: “He’s pissed at everyone. Me. The kids. The dogs. We’re never enough. He throws temper tantrums that are exhausting me.”

Kevin cuts her off: “I look forward to seeing her all day, but she never misses me. I text and call but she ignores me. It’s like I’m annoying her. Do you know how many women crave a man who misses them during the day?”

Katrina eyes widen. She turns to him. “You never give me a chance to miss you. If you missed me so much, why do you come home so angry?”

“I’m angry because when I get home the kids are out of control, I’m exhausted, and you ignore me.”

“I’m not the mean person,” he responds “You’re the cold one. You’ve even admitted it. When I call you during the day or ask to spend time with you at night, you’re always busy. You never say anything nice to me.”

Katrina lets out a sigh full of frustration. “You ignore the nice things I say. Or you spit them back in my face. Why would anyone want to be around that?”

Kevin glares at her, “I’m not the bad guy here. Do you know that every occasion, like our anniversary, is planned by me? Why don’t you ever plan it?” He crosses his arms. “You never know what to get me for my birthday, and if you even buy anything, it’s days late. Oh, and you don’t even want to have sex with me.”

“I know. You’ve always felt that way. I’m just too much trouble, huh? You’re sorry you married me, don’t lie.”

My Insecurity Is Too Much

You may think Kevin is a needy nutcase. But his behavior is quite understandable when you realize that it stems from his experience with his parents. Kevin doesn’t know this, but he came to this relationship with his insecurity.

Kevin’s ambivalence comes from his desire to connect coupled with his fear of connecting. As he gets close to Katrina, he pulls back, anticipating disappointment. Katrina doesn’t help the situation either, because her life experiences have taught her to remove herself from stressful situations in her relationships. Her removal reinforces Kevin’s insecurity.

While Kevin did receive plenty of affection from his mother, his life story focuses on the times she was upset with him. He remembers the moments she was too anxious to deal with his childhood fears or too occupied with her own life to deal with his needs.

Have you ever tried to resolve fights in your relationship to your best capability, but your partner always shuts you out?
Read more
wpDiscuz
1
0
Would love your thoughts, please comment.x
()
x
| Reply