Can You See The Woman? Find What it Means if You See the Hidden Figure 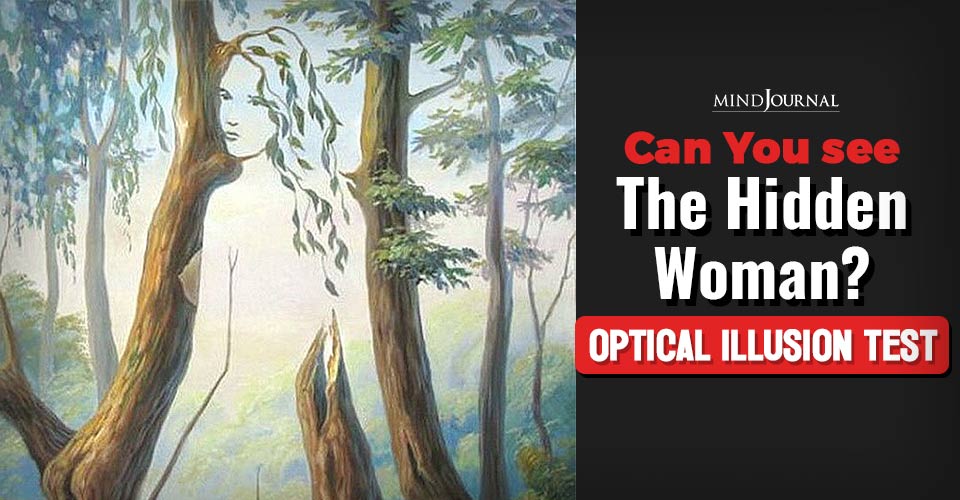 First, clear your mind and take a look at the image given below.

The surrealistic image displayed above is a renowned oil painting crafted back in 1991 and is a fine optical illusion. The painting shows a dense woodland scene, in which trees are depicted on either bank of a river. But this river and tree illusion reveals a risqué pic of a bare woman too, but only to those who can see.

If you look intently, you too might see the hidden figure appear in the blank space between the branches and trunks of the trees.

So, what does it say about you if you can discover the risqué hidden figure in this river and tree optical illusion?

Significance Of The Risqué Hidden Figure

The female figure portrayed in this illusion is believed to be a depiction of the mermaid named Berehynia from ancient Eastern Slavic mythology.

According to the folklore, Berehynia was considered a pure soul or a good spirit and was revered as the guardian of the various water bodies, including rivers, lakes, and reservoirs. The ancient Slavs who resided on the banks of lakes and rivers believed that Berehynia was responsible for protecting and preserving the water.

What Does It Mean If You Can See The Risqué Hidden Figure?

If you can make out the risqué second image, then it means:

Related: Check out this optical illusion personality test to know the 5 hidden sides of your personality!

Hope you had fun with this optical illusion quiz. But wait! We have more!

We knew that after the risqué hidden figure quiz, you will get a hankering for more such cool optical illusions. That’s we have lined up one more for you. Have a look!

Check Out This Blank Space Illusion Too

Can you see any human figure between these black columns?

The above given optical illusion also utilizes blank or negative space, just like the risqué hidden figure quiz.

At a glance, this picture would appear to show what seems like giant pieces of a chessboard. But, if you look closely, you might see human-like figures in between the black columns.

No! sorry to disappoint you, but there are no risque hidden figures like the earlier one!

However, there are figures resembling human bodies hidden in the blank space between the columns. You might zoom in to have a closer look.

The silhouette of a person’s side profile will appear. You might catch the side of the face at the top of the black columns. Keep looking down, and the rest of the body will pop up right in front of your eyes!

Related: Take this emotional intelligence test, if you want to know how well you identify the emotions of others, as well as yours!

Keep Looking For The Hidden Truth

If you want to take away one thing from these optical illusions, then imbibe the virtues of patience and observation. Don’t be too quick to judge or make assumptions regarding anyone or anything based on what you can see on the surface level. Go deep and seek the inner truth! And you will discover startling facts about life and people’s personalities.