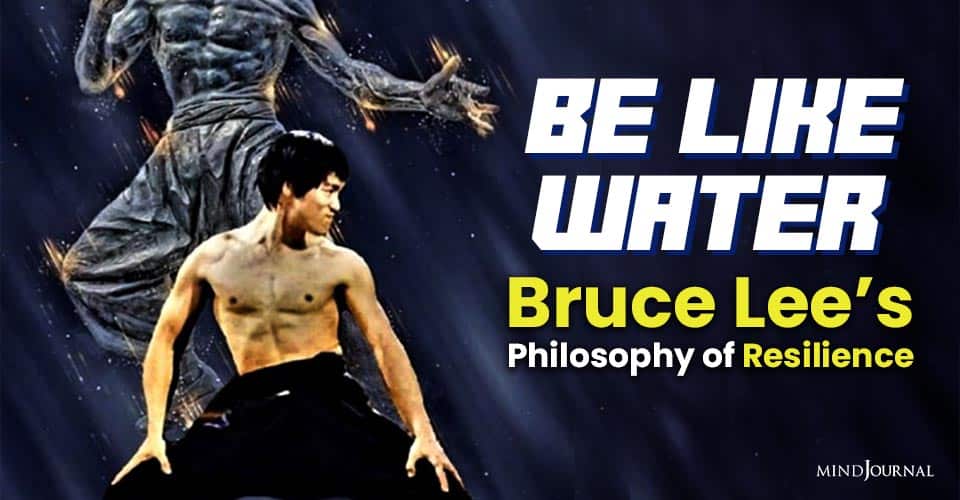 Speaking to the character Mike Longstreet in an episode of the short-lived television series Longstreet in 1971, martial artist Bruce Lee made the now famous statement about “be like water”, summarizing the concept of Wu Wei, of acting forcefully without force or effortlessly exerting effort.

As Maria Popova of Brain Pickings points out, the quote as it lacks life context, and fails to inform us of the depth of Lee’s thought and his journey to this conclusion.

“BUT THE FAMED SNIPPET BELIES THE FULL DIMENSIONALITY OF THE METAPHOR AND SAYS NOTHING ABOUT HOW LEE ARRIVED AT IT.” ~MARIA POPOVA

Prior to his untimely and tragic death in 1973, Lee had created an archive of personal letters, journal entries, affirmations, training notes and messages to himself, many of which ended up in the book The Tao of Jeet Kune Do. Much of this material was never made public, however, until the Bruce Lee Foundation released a more comprehensive collection of his notes in 2001 in the book, Bruce Lee: Artist of Life.

In 2016, the Bruce Lee Foundation released even more of Lee’s personal notes, adding yet more to our understanding of his true character, and in these, we find insight into how his personal philosophy of life evolved into the direct and inspiring sound byte, ‘Be Like Water.”

What’s fascinating about these notes is the insight it gives us into the long process of Bruce Lee’s self-awakening and self-actualization, an endeavor all of us may be well served to take on.

Again, according to Maria Popova, “Lee traces the thinking that originated his famous metaphor, which came after a period of frustration with his inability to master “the art of detachment” that Yip Man was trying to impart on him.”

As Lee is quoted in the book, Bruce Lee: Artist of Life:

When my acute self-consciousness grew to what the psychologists refer to as the “double-bind” type, my instructor would again approach me and say, “Loong, preserve yourself by following the natural bends of things and don’t interfere. Remember never to assert yourself against nature; never be in frontal opposition to any problems, but control it by swinging with it. Don’t practice this week: Go home and think about it.”

Upon reflection and meditation in the following days, Lee came to some enlightening conclusions about his ability to practice Wu Wei, or the art of detachment, making the connection to water and to the fleeting influence of thoughts and attachments which normally cloud our thinking and color our outlook on life.

After spending many hours meditating and practicing, I gave up and went sailing alone in a junk. On the sea, I thought of all my past training and got mad at myself and punched the water! Right then — at that moment — a thought suddenly struck me; was not this water the very essence of gung fu? Hadn’t this water just now illustrated to me the principle of gung fu? I struck it but it did not suffer hurt.

Again I struck it with all of my might — yet it was not wounded! I then tried to grasp a handful of it but this proved impossible. This water, the softest substance in the world, which could be contained in the smallest jar, only seemed weak. In reality, it could penetrate the hardest substance in the world. That was it! I wanted to be like the nature of water.

Suddenly a bird flew by and cast its reflection on the water. Right then I was absorbing myself with the lesson of the water, another mystic sense of hidden meaning revealed itself to me; should not the thoughts and emotions I had when in front of an opponent pass like the reflection of the birds flying over the water?

This was exactly what Professor Yip meant by being detached — not being without emotion or feeling, but being one in whom feeling was not sticky or blocked. Therefore in order to control myself, I must first accept myself by going with and not against my nature.

Furthermore, completing his understanding of Wu Wei and the necessity of being like water, Lee writes a reflection of his thoughts on the great teachings of Lao Tzu.

“The natural phenomenon which the gung fu man sees as being the closest resemblance to wu wei [the principle of spontaneous action governed by the mind and not the senses] is water:
Nothing is weaker than water,
But when it attacks something hard
Or resistant, then nothing withstands it,
And nothing will alter its way.”

The above passages from the Tao Te Ching illustrate to us the nature of water: Water is so fine that it is impossible to grasp a handful of it; strike it, yet it does not suffer hurt; stab it, and it is not wounded; sever it, yet it is not divided. It has no shape of its own but molds itself to the receptacle that contains it. When heated to the state of steam it is invisible but has enough power to split the earth itself. When frozen it crystallizes into a mighty rock.

First, it is turbulent like Niagara Falls and then calms like a still pond, fearful like a torrent, and refreshing like a spring on a hot summer’s day. So is the principle of wu wei:

The rivers and seas are lords of a hundred valleys. This is because their strength is in lowliness; they are kings of them all. So it is that the perfect master wishing to lead them, he follows. Thus, though he is above them, men do not feel him be an injury. And since he will not strive, none strive with him.” [Source]

This article (Bruce Lee’s Private Letters Explain What He Really Meant by ‘Be Like Water’) was originally created and published by Waking Times and is published here under a Creative Commons license with attribution to Dylan Charles and WakingTimes.com. It may be re-posted freely with proper attribution, author bio, and this copyright statement.

previousTo The Person Who Feels They’re At Their Breaking Point
nextWhat is Real Love? How You Know What You’re Experiencing Is Real Love?