Zodiac Signs As Sassy Quotes: Which One Is Yours? 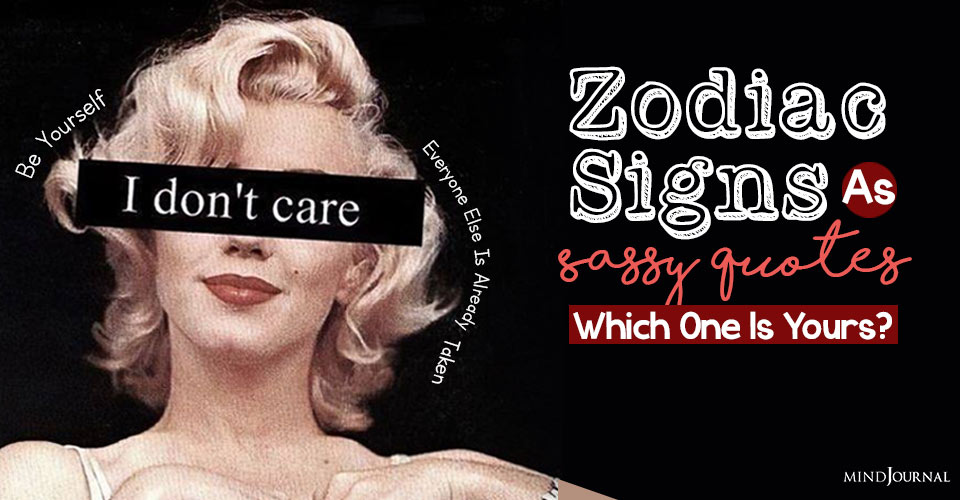 You’re someone who would appreciate zodiac signs funny quotes because you come up with some of the most clever and witty stuff in an argument that the other person will think twice before messing with you.

You’re the type of person who delivers the right remark at just the right moment, blowing everyone’s mind. The best part is that you don’t even regret what you say because it’s probably true 90% of the time. Your sense of humor and sass truly gets you through the day.

You may seem like a friendly person who is sociable but unlike most people, you don’t rely on things like gossip. You are an air sign which means that you’re mostly chatty and love to talk. But if you have zero interest in someone you really want to avoid them.

However, you have a hard time telling people that you’re not interested in having meaningless conversations with them. Hence, sassy quotes for each zodiac sign will be able to describe your mood appropriately.

“Just because I’m smiling doesn’t mean I don’t want to punch you in the face.”

Scorpio, you despise being labeled a feisty or sassy person, but that’s exactly what you are. You have a lot of ideas that you like to share, but you come off as the enigmatic and secretive one. You like to be right all of the time and can’t handle criticisms even though you try to show that you can.

You often allow your emotions to get the best of you and let your sass out. You believe that no one is worth your time. And you don’t give a damn about what others think about you. You’re too busy with being a diva.

“I don’t tolerate lies, I’m a nice person, not a stupid one.”

If zodiac signs as sassy quotes were a title, you’d have the most entertaining one. Ever heard of the phrase sugar and spice? Well, that’s what you are. You’re the kind of person who deeply values honesty and is super nice to people.

You yourself are nearly incapable of being dishonest and refuse to accept any sort of deception in other people. If someone lies in front of you, you’ll unleash your sassy and snarky side and ruin them with remarks.

Read The Good and Bad of Loving A Sagittarius: 7 Brutal Truths

“I chase my goals, not people.”

Among sassy zodiac signs, you’re also one of them. You’re an ambitious person who is driven with succeed. You won’t sit around and talk about dreams, you will go ahead and achieve them.

You’re not the one to brag about your achievements and go with “actions speak louder than your words,” but if someone tries to act smart with you, your sassiness gets the best of you and you’re a master in making other people feel like crap.