What Keeps You Addicted To The Abuser: Your Brain on Love, Sex and the Narcissist 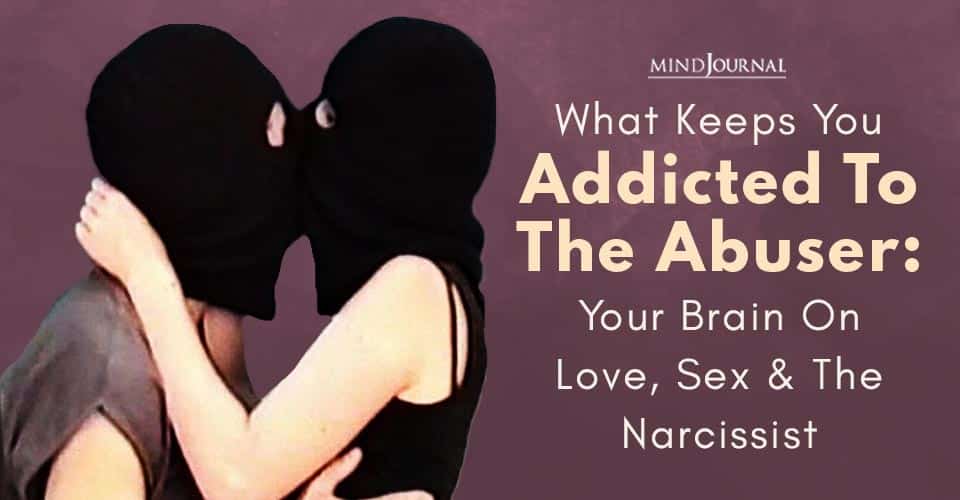 The same neurotransmitter that is responsible for cocaine addiction is the same one responsible for addiction to dangerous romantic partners. According to Harvard Health, both drugs and intense, pleasurable memories trigger dopamine and create reward circuits in the brain, essentially telling the brain to “do it again.”

Related: How to Supercharge Your Dopamine Levels Naturally and Never Feel Depressed Again

Do you remember recalling the pleasurable, beautiful first moments with your narcissistic partner? The romantic dates, the sweet compliments and praise, the incredible sex – long after you two had broken up? Yeah – it’s releasing the dopamine in your brain that’s telling you to “do it again.”

The salience theory of dopamine suggests that our brain releases dopamine not just for pleasurable events but to important ones that are linked to survival. As Samantha Smithstein, Psy.d, puts it, “Dopamine is not just a messenger that dictates what feels good; it also tells the brain what is important and what to pay attention to in order to survive. And the more powerful the experience is, the stronger the message is to the brain to repeat the activity for survival.”

Abuse survivors are unfortunately hijacked by dopamine. Abusive tactics like intermittent reinforcement work well with our dopamine system because studies show that dopamine flows more readily when the rewards are given out on an unpredictable schedule rather than predictably after conditioned cues.

Related: How Narcissists Make You Physically Sick and 5 Ways To Restore Your Health

So the random sweet nothings whispered to us after an incident of emotional abuse, the apologies, the pity ploys, the rare displays of tenderness during the devaluation phase, right before another incident of abuse – actually help cement this type of reward circuit rather than deter it.

Combine this with powerful experiences of abuse that alert our brain to “pay attention” as well as pleasurable memories we recollect over and over again – and we’ve got ourselves a biochemical bond from hell – that’s how victims remain addicted to the abuser.

Cortisol is a stress hormone, and boy, does it get released during the traumatic highs and lows of an abusive relationship. It is released by the adrenal glands in response to fear as part of the “fight or flight” mechanism. Since we are unlikely to have a physical outlet of release when cortisol is triggered during cycles of emotional abuse, this often traps the stress within our bodies instead. As we ruminate over incidents of abuse, increased levels of cortisol lead to more and more health problems. Christopher Bergland suggests numerous ways to counteract the effects of this hormone, which include physical activity, mindfulness, meditation, laughter, music, and social connectivity.

Related: How Stressed Are You? Take This Stress Quiz To Find Out

Adrenaline and norepinephrine also prepare our body for the flight or fight response and are also culprits in biochemical reactions to our abusers. Adrenaline promotes an antidepressant effect, triggering fear and anxiety which then releases dopamine – this can cause us to become “adrenaline junkies,” addicted to the rush of vacillating between bonding and betrayal. During No Contact, withdrawal from that “rush” can be incredibly painful.