You were right to want it different 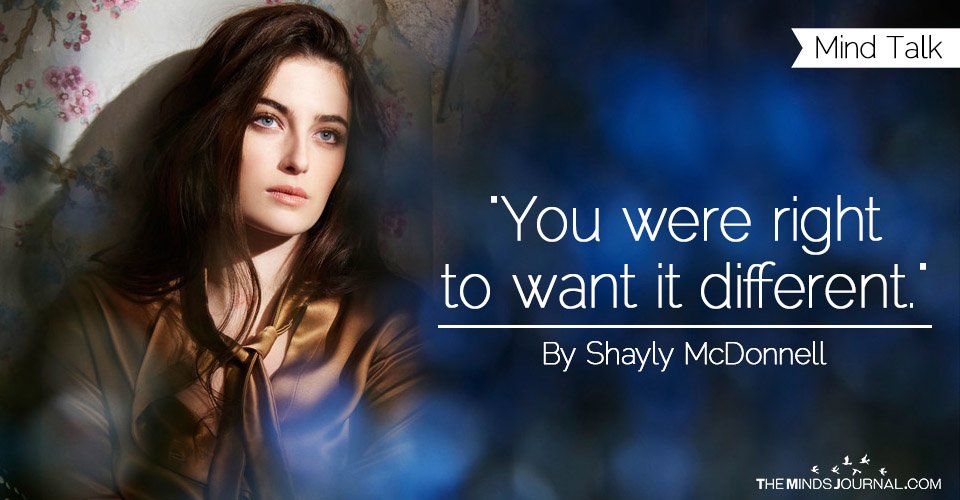 I knew you were right when you said

“I can’t do this anymore. I need this to be different.”

When I asked you why, what…how?

You shook your head defeated.

It was then I realized you cut me from your story.

I could see it clearly, in bold, in caps, in writing.

Not because the world decided that’s how it has to be,

but because I decided it could be, was going to be, had to be…fuck!

I turned into your bad guy.

I thought it would help…

I remember saying it’s my turn.

But I’ll also be your hero.

I thought it would help.

I remember saying it’s my turn.

What you failed to see in me was why I wasn’t them.
I came to you and you to me,
when the story was getting lost.

When we could no longer fight alone.

I won’t let you tell me you can’t do this anymore.

I’ll fight to make it different.

The plan is simple, really.

The plan is this:

I’ll watch you be you.

Fall in love with your dance.

Let us decide to change our story.

Rewrite the words they said were fact,

We’ll do this because we have to.

You’ll make it yours,

I’ll make it mine.

Instead of letting fate decide,

it never could, it never will.

I’ll white out what they deem too rebellious,
raise the bar past normal,
We’ll chase the things they won’t,
inspire those who can’t.
Change the game completely

as many times as we have to,

as many times its needed.

I’ll let what heals you get to write our story,

but not the one they want.

I’ll watch you heal, mold, and expand into the hero you are meant to be.

force the void to shake us from its spell.

And in the chaos, the madness, the mess,

those places you heal most.

I’ll let it heal me too.

Because as of right now,

it’s the only way things can be different.

It’s the only way I get you.

It’s the only way we win.

Let the story tell: that what heals you, heals me too.

Let them all rejoice in our plot twist .

The plot twist they all scoffed at.

Let it be known to all who doubted we could,

the author we let write our story before,

he handed us his pen.

We wrote the story how we wanted it.

We wrote our happy ending.

The one that doesn’t have either of us as bad guys,

but both of as heroes.

And I’ll never be afraid to tell you,
“You were right to want it different.”