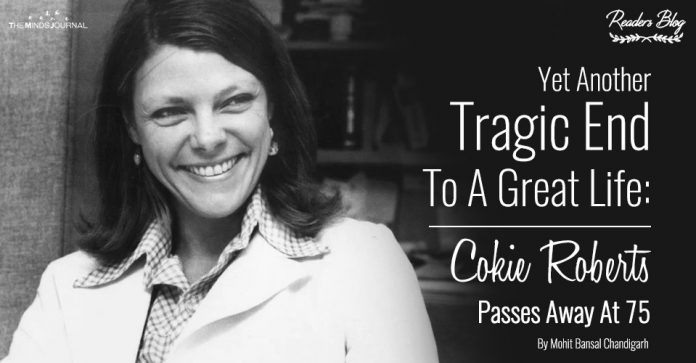 Yet Another Tragic End To A Great Life: Cokie Roberts Passes Away At 75

Mary Roberts was (it hurts saying ‘was’) an American journalist and a best-selling author.

She was famously known as ‘Cokie Roberts’. She said that she got the name Cokie from his elder brother and it stuck with her. Mary Martha Corinne Morrison Claiborne Boggs (yes, this was her full name, however, it was still too short considering her greatness and knowledge) was born on 27th December 1943, in New Orleans, Louisiana.

The reason why his elder brother Thomas Hale Boggs Jr. (an American lawyer who passed away on 15th September 2014 just 3 days prior to his birthday) called her ‘Cokie’ was because as a kid, he was unable to pronounce Corinne properly. Other members of her family were her father Hail Boggs, her mother Lindy Boggs and her elder sister Barbara Boggs Sigmund (the Mayor of the Borough of Princeton, New Jersey who passed away on 10th October 1990).

Both of her parents served for decades as domestic members of the house of representatives from the state of Louisiana. Cokie did her schooling from the Academy of the Sacred Heart which was an all-girls school in New Orleans, Louisiana. She graduated from the Stone Ridge School, Washington, DC in 1960 which was also an all-girls school. Roberts completed her degree in BA (Political Science) from Wellesley College in the year 1964.

WRC-TV in Washington, DC was her first place of work where she worked as the host of a weekly show ‘Meeting of the Minds’ which talked about public affairs. After a few years, she moved to New York City with her husband and found herself working as a reporter for Cowles Communications. She changed a lot of jobs because she kept moving place to place with her husband.

After working as a producer for WNEW-TV, she and her husband moved to Los Angeles, where she worked for Altman Productions and then for KNBC-TV. After that, they moved to Greece and there she worked as a stringer in Athens for CBS News. She was then the congressional correspondent for more than ten years at NPR. Roberts was also the co-host of ‘The Lawmakers’ which was a weekly program on congress. She did this while working for NPR at the same time.

In 1988, Cokie was awarded the Edward Weintal Prize for Diplomatic Reporting for her coverage of the Iran-Contra Affair. Roberts then worked for many other famous news companies such as ABC and many others like it. Other than being a journalist, Cokie was also a famous best-selling author. As an author, Cokie published seven books that talked about many political and social issues.

Cokie married Steven V. Roberts (he is also an American journalist, writer, and political commentator) in 1966. They met in the summer of 1962 when she was 18 and Steven was 19. The couple settled in Bethesda, Maryland and had two children. One of them is their daughter Rebecca Roberts who is also an American Journalist and also co-hosted POTUS ‘08 on XM Radio.

Everything seemed to be going amazing for the family until when Cokie was diagnosed with Breast Cancer in 2002. Although she was treated successfully at that time, she passed away yesterday (17th September 2019) due to complications of the disease. Yesterday, the world lost a great person who inspired a lot of people to work hard and be the best in their respective fields.

Many people were shocked and many of them expressed their grief on social media and in other ways. BBC posted a story on Cokie Roberts yesterday which is very moving and inspirational. Also, Nina Totenberg also posted on the official site of NPR remembering Cokie Roberts and expressing her grief for the legendary reporter’s passing. Moreover, even the president of the United States tweeted about the passing of Cokie Roberts, however, I won’t be sharing that tweet here because I want to keep this article respectful and positive.

The whole world is in shock after the passing of this amazing journalist and a great author. She will be missed and hopefully, her legacy will be carried forward by her daughter Rebecca Roberts. Remembering the inspirational personality, here is an immortal (undying) quote by her:

“The truth is, the notion that gay marriage is harmful to marriage, is sort of mind-boggling because these are people trying to get married. But it seems to me, if you want to defend marriage against something, defend it against divorce” – Cokie Roberts

I have shared this quote because it perfectly reflects how amazing of a person she was. This shows that she had her own voice and an understanding of people’s needs and feelings.

Mohit Bansal Chandigarh
Mohit Bansal Chandigarh is a keen photographer and traveler. It’s hard to say whether he travels to click photos or he clicks photos so he can travel. He’s passionate about photography for sure and does like to travel a lot. Probably he’s travel is the reason for some of his iconic clicks. When he’s not busy clicking pictures or when he’s idle at home, find him on http://mohitbansalchandigarh.in
-Adverts-