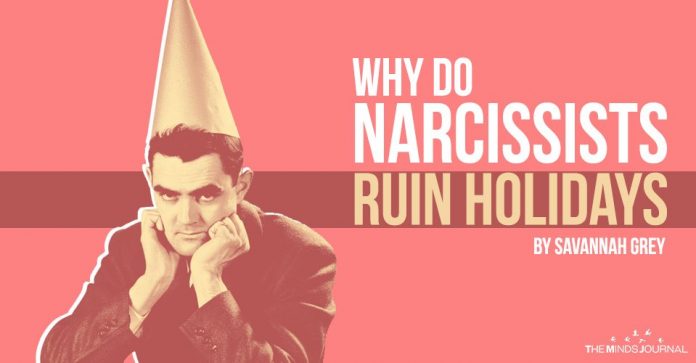 Why Narcissists Love To Ruin Holidays and Special Occasions

The disappearing narcissist doesn’t care that it’s the holidays and that they have hurt you deeply and left you all alone. These thoughts don’t resonate with them. As masters of justification, they simply choose a stance and stick to it, making sure that you are wholly to blame.

When an activity is all about someone else, like a birthday, a promotion, or a graduation, a narcissist will find no value in celebrating another’s achievements (unless of course, they could obtain supply through proxy). Instead, it would activate feelings of jealousy and envy. Because someone else is being put on that proverbial pedestal and getting the attention that should be theirs, a narcissist would find those encounters intolerable and would seek to avoid them at all costs.

If it can’t be all about them, where they and everyone else gets to bask in their glorious essence, then they will get attention another way and that’s by being an ornery cuss.

Being miserable means everyone will cater to their needs, in an effort to appease them or make them happy. They love this. If they can get you to feel responsible for their moods, so that you are jumping to their every command and feeling like you owe them one, they’ll like that even more. If it’s not all about them in a good way, they’ll make it all about them in a bad way. Either/Or it makes no difference.

3) They Don’t Do Intimacy, Responsibility or Obligation:

Celebrating the holiday’s with a significant other is a big deal. You’re probably going to end up at somebody’s relative’s place – yours or theirs and when a narcissist accompanies you, or brings you to visit their family – that’s a statement. Unfortunately for many a narcissist, it’s a statement they don’t care to make. Sharing special occasions breeds the kind of intimacy that a narcissist just can’t handle. Things are getting too serious and it renders you important, when they want you to feel like you’re not. It creates expectations that a narcissist doesn’t want you or anyone else to have. With those expectations, comes a responsibility to behave like a significant other. It means getting closer, which they cannot allow. Their anxiety always gets the better of them, so they’d just as well leave you hanging, or start a fight, so they don’t have to deal with it. This anxiety makes them incredibly unreliable. When it’s upon them, their primary goal is to alleviate it, which usually means shutting you out, or making you miserable. Their anxiety paired with their lack of empathy is a holiday recipe for disaster.

I’ve had many a client tell me they’ve had solid plans for the holidays, with their narcissists and then find themselves stood up, or on the receiving end of a text, cancelling at the last minute. The next thing they know, they see pictures on social media of them spending the holidays with someone else. They’re devastated and asking – “WTH?”

A good rule of thumb is to always remember that new supply always trumps old supply. New supply turns on the narcissist’s laser focus and obsessive attention. There is no way old supply can compete. It doesn’t mean they’re better – it means they’re newer/unconquered. So if you get that text on New Year’s Eve, after you’ve turned down everyone else’s offer, this is likely what’s happened.

5) Misery is Their Default Setting:

Miserable people create miserable energy and environments everywhere they go. They are dark people, who project their feelings onto other people. Ruining another’s joy is like a trophy for them. It makes them feel important and powerful. If they believe the holidays are foolish and irrelevant, they don’t care that they mean something to you. Your opinions are usually irrelevant unless of course, you carry the same opinion as they do.