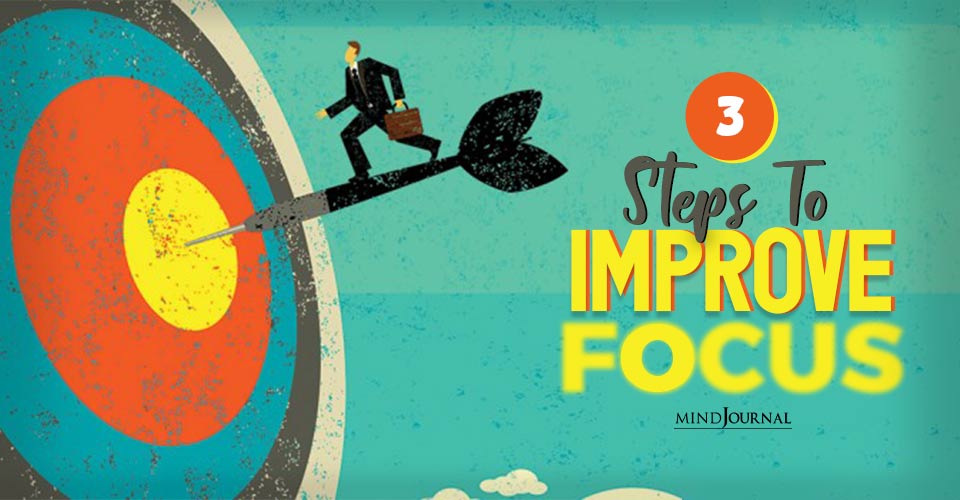 He lived the quiet life for weeks, which made him wonder what his neighbors had done to dampen the sound. Of course, the noise hadn’t decreased at all—he had just stopped focusing on it.

You get what you focus on, so you ought to focus on what you want.

It’s a simple idea, but one that can be hard to establish in our daily habits: maintain focus on what you actually want to achieve. It is very easy to concentrate on trivial things that you don’t actually care about.

But no one can control your focus but you.

What are you thinking about all the time? How are you spending your energy? What do you spend your time talking about?

Excellence is never an accident. It comes as a result of knowing exactly what you are trying to accomplish and preparing for it.

If you go through life with only a vague notion of the skills, actions, and ideas you need in order to perform particular tasks or succeed in certain settings, you will never be your best.

Consider Abby Wambach, the most prolific scorer in the history of international soccer. With 184 goals, she has scored more than any other player—man or woman. And she scored one of the most exciting goals during a quarterfinal match against Brazil in the 2011 World Cup.

At the end of regulation time, the score was tied. Then, 28 minutes into a 30-minute extra time period, Brazil scored to take the lead 2–1. With the clock winding down, the Americans started to press, desperately trying to even the score.

With only a bit of injury time left, a player named Megan Rapinoe crossed the ball in front of the Brazilian net, and Wambach dove forward and headed it into the net. The game then went to penalty kicks and the Americans won.

The play was so spectacular that it was selected by ESPN as the ESPY Best Play of the Year.

After the game, Wambach was asked about the goal. She said simply, “I have been preparing for that goal my entire life.”

It wasn’t luck and it wasn’t a fluke. She was known for her expertise in heading the ball. She had worked at it and worked at it, narrowly focused on that particular skill, until she could perform it effortlessly, even with the hopes of an entire country riding on her back.

Wambach’s story is a model for all of us. When you practice, what is it you are trying to achieve? If you are sloppy or unclear, you won’t improve.

It’s about focusing on the precise skills you want to develop.

Related: The Johari Window: How To Build Self-Awareness and Achieve Success

Focus Builder 3: Choose Your Own Definition of Success

I’m not the typical type-A personality leader. I don’t use file folders. I often don’t know where my wallet is. But all my life, I’ve had a passion for inspiring people to achieve big goals and I’ve had a desire to make a difference.

At the beginning of my career, this desire created stress for me when I looked around at other leaders and saw that I wasn’t like them…

I became focused on my deficiencies. I focused on what I was not. And it had a significant effect on my confidence.

I began to believe the negative feedback I was getting from people who projected onto me their views about leadership.

In time, and with exposure to some inspiring and very different leaders, I came to see that leadership is not a train on a track headed in the same direction for everyone.

For me, it’s about inspiring people to think about what they previously considered impossible.

This may not be what leadership is to you. Different kinds of people can be and are leaders. I just needed to figure out what kind I was and get on with being my best version of it.