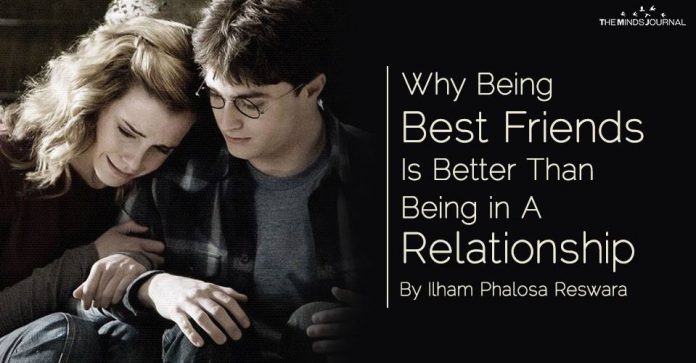 Why Being Best Friend Is Better Than Being in A Relationship

Start from getting to know and become friends

Can’t be denied, school life’s filled with so diverse people. Each people have their own hobbies and activities, including us. Usually, from having same hobbies or doing same things, we will find our friends. Yes, friends that have similarities with us. Starting from doing things together, usually, our relations with her/him will get more intense than before. So, start with having the same things, get to know each other, and do things together. Yes, that’s how friendships begin.

In friendships, we don’t bother gender. Regardless of their gender, we’ll consider them as our friends. This tie is getting stronger and stronger if we keep doing things together and sharing each other. By having the same hobbies, usually, we have the same thoughts too. This sense of similarity in ways that makes us feel fit with him or her. If this keeps going on and on, without getting distracted by assignments or another duty, the bonds will get stronger each time.

Where it starts to feel different

Starting from this point, the type of bond that tied between same-gender friends will be different with different ones. Okay, have you ever felt anything different toward your cross-gender best friends? I mean, seriously. You must have felt something different than toward your same-gender best friends right? There is a feeling of comfort and so fit with her right? Then, unconsciously, we start to get jealous if she is with her male friend without our notice, aren’t we? Yes, that’s the sign of a tendency to make her or him our girlfriend (or boyfriend).

At the beginning, usually, we won’t admit it. We usually deny and think “it can’t be.  She is my best friend. I can’t have felt something like this toward her” or something like that. From this point, there are two possibilities that will happen. First, we’re going to feel awkward toward her/him. Second, we’re going to accept it and planning to confess our feeling and try to make her/him become our girl/boyfriend.

The second possibility will be more possible to occur if we think that she/he feels the same way. Yes, this optimistic feeling is the main fuel for our action to get her/him to the next level. Then, we start to think that our relations will be much happier than it used to. Yes, because we think that with those similarities, we’re meant to be together. We think that there won’t be any mistake or chance for making her/him hurt because we start with the same things, similarities.

This is where we tend to miscalculate our relationship. Trust me, the possibility to break up is always there waiting for you, moreover if you haven’t planned to marry with her/him in the short period of time. Then, when we’re in a relationship, we’re tied with “boy/girlfriend” status that makes us believe that she/he is meant for me, not with somebody else. This thing will motivate us to protect her/him.

In order to protect her/him, we want to be her/him every time and only two of us without others. This, gradually, will make us closer and closer. Then, our bonds will get much tighter than we’re just friends.

This thing, when the bond is too tight, will become a chaos when there is unwanted thing happened and force us to break up. I mean, just like I said, we can deny the possibility of breaking up (once more, moreover if we haven’t planned to marry her/him in no time). Don’t you know, the harder the paper is glued to other paper, the larger the torn will be if they’re ripped apart. Just like that, after all those feeling of her/him as our future, after all those bond that’s created, if we’re (unfortunately) forced to be separated, the wound that lies in our heart will be as great as the bond it was.

But, the story will be different if we still consider her/him only as our best friend. By being a friend, there won’t be any feeling that she’s absolutely the one. Yes, probably she/he will be the one, but that’s only a probability because everything is possible, isn’t it? Then, we still can contact or stay close to each other, but not thinking that she/he is only made for us.

By keeping the bond inclusive, we don’t need to worry about breaking up. Like, hello we’re not even together yet. Then, we won’t feel any jealous if she/he is with somebody else. Even, maybe, we will support her/his relationship with that somebody. The affection need is fulfilled by seeing him happy with someone else and we just think, simply, that she/he isn’t the one for us. Yes, that simple.

This kind of feeling, of course, won’t left any wound in our heart. I mean like, we really know and prepare this kind of event since times ago. So, we won’t be any shock like if we’re in a relationship with her/him. So, that’s why being a best friend is much better than being in a relationship, especially toward your best friend.

Do you know that you can accurately project your personality through good behavior, a heart full of love, and a humble attitude?
Read more
wpDiscuz
1
0
Would love your thoughts, please comment.x
()
x
| Reply