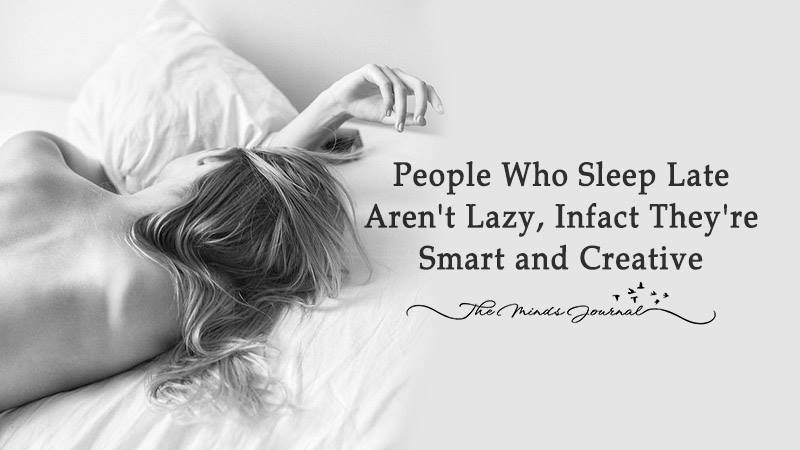 People Who Sleep Late Aren’t Lazy, In fact They’re Smart and Creative (According to Science)

If the last thought on your mind was some variation of “Everything is stupid, why am I awake?” then, despite what your seemingly productive peers may be telling you, you’re probably super creative and definitely an intellectual. Though words like “lazy” and “alarm clock” get tossed around a lot when talking about these infamous late-risers, there’s actually a fair amount of science on the side of sleeping in.

Those of us brave enough to “deviate from the normal sleep schedule” are considered “more intelligent,” according to research published in the Huffington Post. The finding was reportedly supported by research that suggested those who create fresh “evolutionary patterns” are generally the most progressive, a.k.a. intelligent. As noted by Elite Daily, recent research from a team at the University of Madrid showed that students who went to bed later (thus waking up later) actually scored higher on inductive reasoning tests.

Marina Giampietro, lead author of a study on men and women of all ages designed to measure creative thinking, asserts that general creativity is born from “the development of a non-conventional spirit” and “the ability to find alternative and original solutions,” as in, you guessed it, sleeping late. From Elite Daily:

It’s all about what you’re doing with the time you have. Yes, early birds might be more productive, but late risers are more creative.

Early risers take advantage of those morning hours to do mundane activities like go to the gym, make coffee and get to work early, but it’s the late sleepers who really take advantage of the night — the special time to create and invent something new.

Still mumbling “Everything is stupid. Why am I awake?” to yourself? Just go back to sleep. Science says that’ll be just fine.

You Owe Me Sleep

If You Think You Are Too Small To Make A Difference

You were the reason…