Dead For 3 Years and No One Notices! – Lessons From The Joyce Vincent Story

I don’t find anything scarier than dying alone with nobody noticing until my dead body turns to a skeleton.

We all know death is uncertain and it is the most inevitable thing on the earth.

Related: 9 Truths Only Death Can Teach Us About Life

But, can you imagine yourself living alone in the cozy bedroom of your apartment, busy with Christmas preparations and suddenly taking the last breath of your life? Can you see yourself dead and there is no one to check on you, no one to bother about your wellbeing and your body slowly decays?

Sure, it’s very difficult to even imagine such a horrible death.

But, that’s what has happened to Joyce Carol Vincent in 2003. It’s heart-wrenching to know she has been through such extreme circumstances.

Who was Joyce Vincent?

She was a beautiful British woman from North London who died and remained unnoticed for more than two years in her bed-sitting room. Isn’t it strange that there was no one in her life to ensure she was still alive and well?

Not knowing her well, her neighbors didn’t notice her absence. They also thought that the bad smell was due to garbage bins below the apartment.

The mysterious death of this 38-year-old woman was finally realized three years later during an eviction. Till then she seemed to be living “the life” for many people who know her.

Vincent’s skeleton was found in 2006 lying on the floor clutching a shopping bag. She was recognized through her dental records. Police ruled out the possibility of murder and speculated to have an asthma attack. 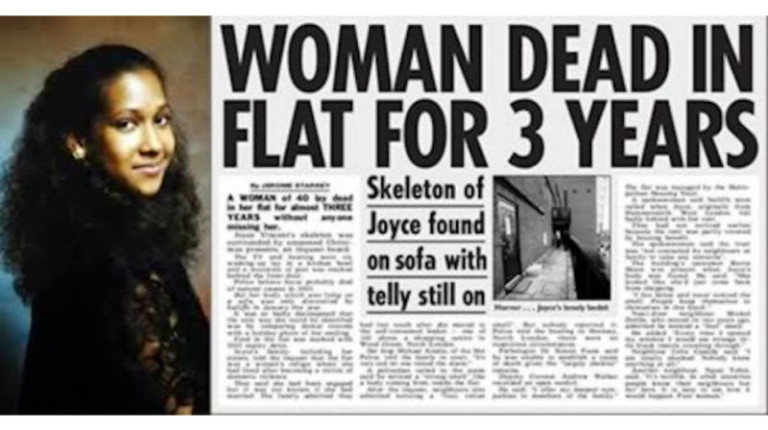 This heartbreaking story was depicted in an episode of “Being Mary Jane”. Vincent’s life and death was the center of the topic of Dreams of a Life, a 2011 docudrama film.

Thanks to the filmmaker Carol Morley who decided to explore her life and his documentary left a heavy emotional impact of what it must be like to die alone. When debuted at the BFI Film Festival in London, the documentary earned a great nomination buzz for the best documentary.

Using the details of this documentary, poet Joel Sadler-Puckering composed a poem about Vincent – I Know Why the Gay Man Dances.

Inspired by her life, English musician Steven Wilson released his fourth solo studio album Hand. Cannot. Erase in 2015. Earlier he formed a rock band – Miss Vincent and wrote a song on her life titled No One Knew.

Finding out the cause of Joyce’s death was highly challenging for Carol Morley because there seemed to be no one who even knew the young Caribbean woman.

Although her family members attended her funeral ceremonies, they never responded to Morley’s inquiries. But, as time passed by friends and associates of Joyce began to reach out and share their experiences with the woman.

As evident from most accounts, Joyce was popular. She was known as a sociable, intelligent, lovable, and charismatic person. Singing was her talent and there were many occasions of meeting with celebrities like Stevie Wonder, Nelson Mandela, and Quincy Jones.

It’s surprising that a healthy, budding singer died suddenly. However, most people missed the possibility of loneliness in her life.

What made this socialite stay aloof and socially isolated that even her death went undiscovered for so many years?

Many people quietly suffer from loneliness every day. A state of feeling empty, alone and unwanted. We either stigmatize people with such destructive mental health issue or too busy notice signs.

Are you feeling lonely? Do you feel lonely even when you’re not alone? Even if you do, there’s no need to worry or get alarmed. Truth is you are not alone in feeling lonely. Loneliness is a Universal Problem and it’s perfectly natural and normal to feel this way from time to time.
Read more
Coronavirus

13 Best Videos On Mindfulness for Kids

Use these videos to help bring attention and focus and how kids feel.
Read more
Entertainment

You can always use a good laugh here and there after a long day of well… staying at home. So why not check out our list of hilarious comedy movies that will make you roll on the floor laughing to reap all the health benefits of a good laughter.
Read more
wpDiscuz
18
0
Would love your thoughts, please comment.x
()
x
| Reply