Why Women Should Stop Putting Marriage Ahead Of Career 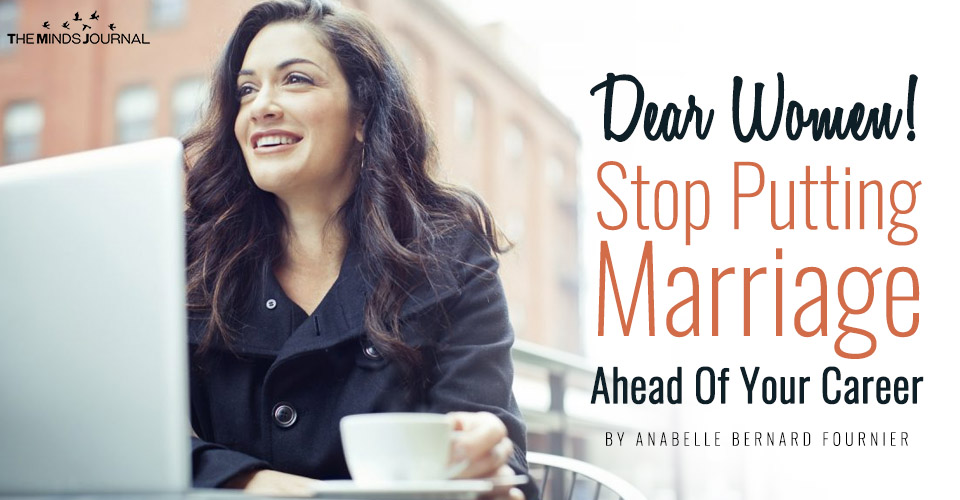 You know what is the biggest driver of salary differences between men and women? The fact that women don’t know how much men in equivalent positions make.

Unions have transparent salary policies, where everyone knows what everyone else is making because it’s in the contract. That way, it’s quasi-impossible to cheat and give men more than women in similar positions.

Corporations have a lot of power over salaries (and the power to pay men more) because salaries are generally secret. Forcing transparency (or even more radical, salary parity where EVERYONE makes the same amount—if the business is successful, everyone wins!) will blow open the pay gap between men and women and make it much easier to fight.

Money is such a taboo topic. When’s the last time you asked someone what they made? It’s the height of rudeness to ask, yet if we do not ask, how are we to uncover inequality and discover our shared state of exploitation?

Everyone is allowed to be as ambitious, or not, as they wish. But ambitious women more often criticized for their ambition than men.

In women, ambition is a negative trait. It makes her “pushy”, “demanding”, “shrill”. In men, the exact same behaviors make him a leader, a visionary, a dedicated employee.

Let’s give our money to women-led companies. Let’s encourage businesses who make gender parity a value, and demonstrate their dedication to it.

Support women with ambitions, because they have a fucking uphill battle.

Senior women executives are asked, in front of junior board members, to fetch a drink for the chairman. Pew Research lists about a million things that stop women from reaching the top ranks of business and power.

I don’t know about you, but I’m tired.

I’m tired of being told that my life is less worthy, less valuable and less meaningful than that of a man because I happen to have female genitals.

I’m tired of being told, over and over again, that my appearance is more important than my mind, that my relationship status matters more than my achievements, and that my ability to bear children trumps my ambitions.

I’m fucking tired of being a second-class citizen, someone who has to fight twice as hard for every client, every hour charged, every pitch sent, every paper submitted.

So, ambitious women, for the love of whatever deity you believe in (or not), please stop putting marriage prospects ahead of your dreams. Be mindful of your attitudes and behaviors around men.

Are you willingly diminishing yourself, your achievements, and your ambitions, simply to appear more desirable to potential mates?

I am a sexuality, relationship, kink and polyamory writer with a bent for science and psychology. My writing explores the intersection of lived experience (usually mine) and psychological research, with a dash of Zen mindfulness and always framed by feminism. Originally from Montréal, I now live in Victoria, Canada (the Canadian tropics) with my cat Preeya. In my spare time I enjoy reading, crafting with knitting, crochet and sewing, hunting Pokémon, and watching TV.View Author posts