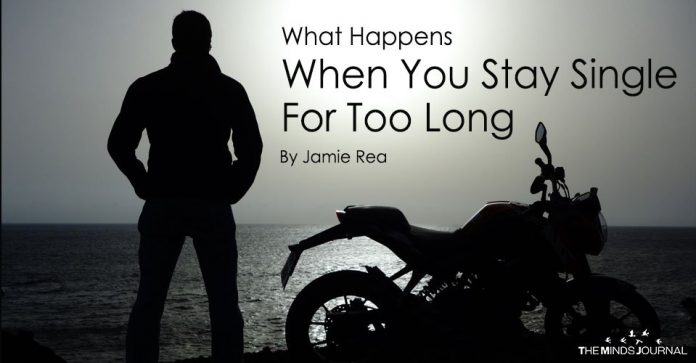 What Happens When You Stay Single For Too Long

So when this guy eventually does find his next relationship, what are some of his behavioral tendencies from when he was single that may carry over and put a strain on his new relationship?

He may flirt more than is considered appropriate for a taken man. Say a guy goes five years without a relationship, that’s five years without ever committing to one person, or having to control or refrain from giving in to temptation and attraction. A single man sees a hot girl; he does everything in his power to have sex with that hot girl. A guy in a relationship sees a hot girl, he probably wants to have sex with that hot girl but he doesn’t because there is this other human who would be completely and utterly destroyed if he did. The guy who hasn’t be in a relationship for five years probably won’t cheat, but he may have a hard time controlling his attraction to a manner that is deemed appropriate for a committed man. When you’re single for so long, you flirt freely, without any repercussions for your behavior, but a guy in a relationship is always under a microscope in terms of how he talks to the opposite sex. It’s not an easy thing for a guy who’s been out of the game for that long to re-learn what is considered appropriate and what is considered to be crossing the line. Even in terms of what should be considered straightforward inappropriate behavior like texting with other women, messaging them on social media, or taking flirting in person too far, sometimes are not easy habits for these guys to kick. There’s nothing wrong with a certain level of flirting in a relationship, in fact, it’s actually healthy in the right amount, but you have to be aware of the message you’re sending to other girls, particularly to those who don’t know you have a girlfriend and might be led on.

Guys who go so long without relationships often have grown to be selfish. It’s the little things that you learn from being in a relationship: making plans and decisions together, deciding what restaurant to eat at, sharing your bed, remembering to return their messages and call them before you go to bed, and just having to consider someone else’s stance and opinion on everything you do. A guy who is used to being single does his favourite things all the time, he never has to make compromises or actually think about how his actions will affect another person. He’s free to party when he wants, drink to excess and make a fool of himself because the only person he has to embarrass is himself, turn his phone off and disappear from the world when he’s hungover because he doesn’t have someone constantly wanting to know his whereabouts, and he can sleep with however many women he wants and doesn’t have to worry about his sluttiness affecting anything but his own moral conscious. Relationships teach us to co-exist with someone else, to learn how to work together with someone and create a partnership, to understand that the world doesn’t revolve around us, and sometimes we have to do our second favourite thing so the person we care about can do their favourite thing.

Being single and being in a relationship are different gears. For a guy who hasn’t shifted into the relationship gear for a while, it’s going to potentially be a rocky transition. Before he just lived his life for himself, and now he’s learning, again, what it’s like to share your life with another human being. That’s the struggle and the beauty of it. Relationships are extremely difficult because we have to work our way through the world, knowing that someone cares so deeply about everything we do, that our pain becomes theirs, that our happiness is their happiness, and someone who’s heart could be shattered if we betray them. That’s a lot of responsibility for someone, especially someone who hasn’t had to deal with that responsibility in quite some time.

Jamie Reahttp://jamienrea.com
Jamie Rea is a Canadian Dating, Relationship, and Life Coach, Award-Winning Screenwriter & Filmmaker, and Comedy Writer & Creator. He has written about relationships for various digital publications across Canada, the U.S., and the U.K., including Made Man, Mode Media, the talk, and Elite Daily. On top of his regular writing duties, Jamie coaches both men and women in professional coaching capacities, helping them to unlock their potential and find the great love they desire. He also Co-Founded the Legendary Love Academy with his partner, an online school for all the relationship education you need but didn't receive, and serves as Co-Host with his partner of their Podcast, The Power Couple Podcast. In addition, Jamie is also a Performer, Screenwriter, Filmmaker, and Comedian, and is regularly generating his own film and video content for the online space and the film industry. You can follow him and his work here: Coaching Services
-Adverts-

Do you have an inherent need to please others, and want them to like you?
Read more
wpDiscuz
0
0
Would love your thoughts, please comment.x
()
x
| Reply