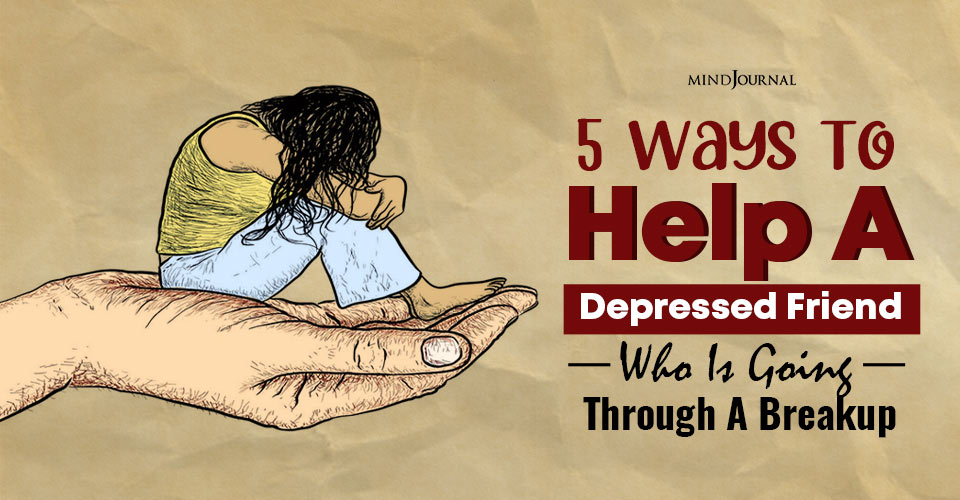 4. Listen to them and don’t try to fix them.

The number one worst thing that we can do when someone we love is depressed is to try to fix them. We do want to help and yet, by trying to fix them, we tend to take only makes things worse.

Think about when you are feeling bad, no matter what the reason. Doesn’t it just piss you off when someone says ‘it’s all going to be ok,’ or ‘get over it’ or ‘relax’ or ‘move on.’ All of those things seem like platitudes and only make us feel horrible.

Even worse is when people start questioning your choices. ‘How can you be crying over that asshole?’ ‘Eating ice cream on the couch is a waste of time.’ ‘If you just take a shower we will go out and you will feel better.’

I 100% percent support you in the desire to help your friend who is depressed after a breakup, or for any reason, but thinking that you can fix them, or that they want to be fixed, will only make them feel worse about themselves and all that trying to fix will do is drive a wedge between you.

So, listen to what they say, give them empathy, let them know that you are there but don’t try to fix them. They need to be broken for a while and it’s up to them to fix themselves when they are ready.

Read: 4 Good Reasons Why You Need Not Fix Every Problem In Your Relationship

As I said above, trying to fix someone when they are feeling depressed will only backfire. Even if you believe that your friend needs to get out of the house and start living again, telling them so will only ground them further into their couch.

So, what should you do instead? You should do the things that you want your friend to do. Imagine if you were feeling sad and your friend told you that it was time for you to get up and go for a walk with her, that it would make her feel better.

How would that make you feel, having someone tell you what you needed to do to feel better? Not so good. Instead, I would tell your friend that you are going for a walk and getting some ice cream. Paint a picture of what a perfect day it is for it and how good that chocolate chip is going to taste.

By doing this, you are using the power of suggestion, planting the idea in her head that these things might be fun instead of telling her. That way, she might actually decide to go because she thinks that it’s her idea. And if she doesn’t go that time, she might just go the next time. On her own terms!

Knowing how to help a friend who is depressed after a breakup is hard. There is truly nothing worse than a broken heart – we have all been there and we know – and seeing someone suffer from one is devastating.

But remember, this is your friend’s journey. You won’t be able to fix them. You can be by their side, encouraging them and supporting them, but ultimately it will be up to them to take the steps that they need to take to get past the breakup and move on.

So, be a friend – be there for them, but don’t try to fix them. Ask them what they need and don’t tell them what you think they need. And when they don’t want you around, respect that. And remember – your friend will be fine. It might take a while, but be patient. You know that no one ever dies from a broken heart. And your friend won’t either.

Life does go on, after all!

How to get motivated to shower when depressed?

You might try bathing. Also, consider using soaps, shower/bath bombs, etc. that boost your mood. Reward yourself after you manage to take your shower or bath.

Do depressed people go around constantly and say they’re depressed?

A person who is suffering from depression might conceal their condition and try to appear happy. They might open up to friends, family members, or anyone who would understand.

How to get motivated to do school work when depressed?

Break your work into smaller tasks and maintain a checklist. Take breaks between your tasks, go for a walk, and don’t fall into the trap of perfectionism.

Who will a depressed person most likely open up to?

A depressed person is most likely to open up to a trusted friend, counselor, family member, or anyone who would hear them out without judgment.