Walking Away From Your Twin Flame: How To Make It Easier On Yourself 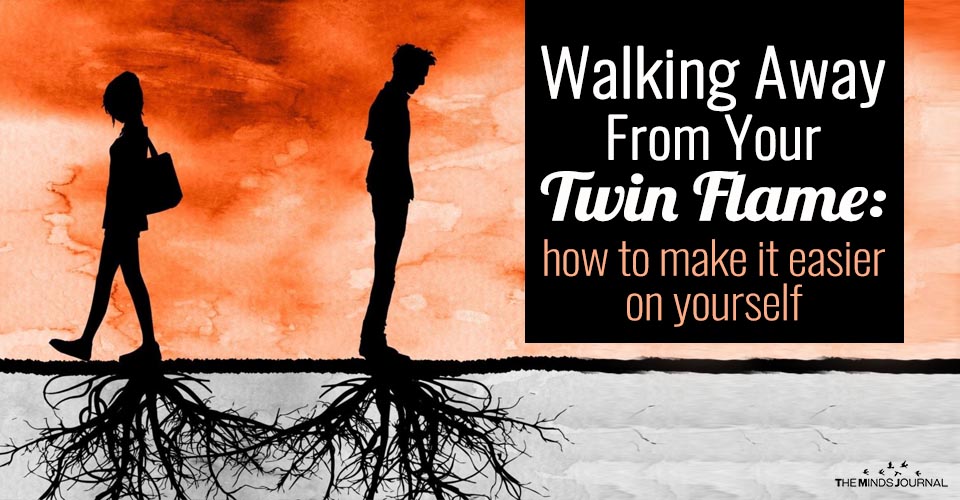 When a twin flame is created, the twins each carry halves of dualities, like the yin yang. Each is mostly one way, with a small touch of the opposite characteristic, and they balance each other out by co-existing together. The same thing happens when they meet on a planetary plane and have a relationship – they meet to balance dualities in each other out.

Sometimes theses dualities are extreme. In many cases, they’re also compounded by karma, and lessons tend to get harder with each subsequent round, and each lifetime. For many of the twin flames, they’re battling huge gaps and separation in their personalities and what they want and need to make the relationship work (dualities), and this is compounded by the fact that the universe gave a super-hard lesson because this happens to be the sixth or seventh lifetime you guys are working on this stuff.

Add in all the energetic chaos we’ve had with the shift and the stop-start energy of stuff, and it’s no surprise that a number of twin flame relationships are buckling under the strain.

Have you ever wondered if you have met a false twin flame? Read 5 Warning Signs You’ve Met Your False Twin Flame

How Do You Make It Easier On Yourself?

I had two strong clues that my relationship was a twin flame relationship: first, any session done on the two of us the session wouldn’t take us as one being, it treated us as a couple.

Secondly, from the day we met, we threw each other out of sync energetically. If he was up with business, I was down. If I was sick and got better, he got sick immediately after. And there were a million other similar examples that I’m sure you recognize from your own experience.

That led me to the following realization: if I kept throwing us out of sync by working on one of us energetically at a time, then maybe the way to fix us was to work on both of us at the same time.

That led to a series of BodyTalk sessions done on the couple where we balanced major energies (workflow, money, success, commitment, focus, vitality, luck) across the relationship and pair. We started seeing improvement after that.

The author and creator of the Life Coaches Toolbox, Healer, Life Coach & NLP Practitioner, Chemory Gunko, also known as Amara Christi. She teaches, coaches, mentor, does readings and healings and makes a huge body of work available to spiritual journeys on her site, www.lifecoachestoolbox.com.View Author posts