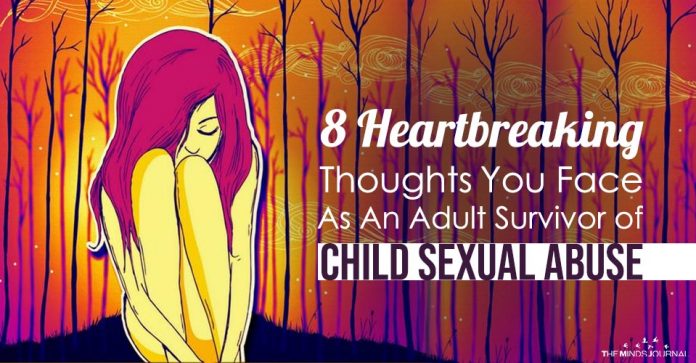 You couldn’t stop it. It wasn’t your responsibility. That’s the reason it’s called sexual abuse. You were being abused, taken advantage of, and mistreated.

There wasn’t anything you could do about it. Adults are bigger, have more power and authority, and either entice you with presents or promises or they threaten you.

It’s important to know that you were not only being abused. You were in a negligent environment. No one protected you.

You grew up feeling you had to be more grown-up than they were. And, because there was no one to count on, you had to take care of yourself. And, this feeling that you were an adult before you were ready, led to an over-developed sense of responsibility.

Even when you were the one being abused, you think you should have been stronger, the one in charge, and able to stop it. But, you were little and scared and couldn’t.

And, now you can’t trust anyone not to use you.

Believing that people want to use you is a feeling you probably live with constantly. That is a common after-effect of sexual abuse. You were used.

You might even feel that the only way to get people to like you is to be the one that gives. You’re afraid of wanting or taking.

If this is you, you likely find yourself in relationships that not- consciously repeat the feeling that people only want to take from you, and not give. To feel repeatedly used, and to be afraid of it happening over and over, is a big part of being unable to trust.

You weren’t taken care of as a child or protected, and now it is very difficult to believe that anyone would want to. You need love, but don’t expect it. If you feel the only way to get anything is to give; then it’s hard to open up.

Real intimacy, whether it is emotional closeness or sexual, requires trust. Children need to trust that touch is safe and those touching them aren’t abusing that trust.

That wasn’t your experience. For you, touch was intrusive, confusing, violating, and it hurt you. Adults should never touch a child, sexually. So, now no touch feels safe at all.

You live with the question, am I being used? Any intimacy brings up this question. You’re not sure who to trust. You may have chosen the wrong relationships. But, even with someone who can be trusted, that person can easily turn into a molester in your mind when you try to open up.

So, even though a need for touch, affection, and sex are normal, you’re afraid.

You stay closed off. Or if you love someone and try to open up, you can’t relax and enjoy it. You can’t let go. You’re tense, no matter how hard you try. And, you feel a lot of shame.

Shame has lived inside you for too long. It seems like it defines who you are. And, you believe there are real reasons for shame. Even though there’s not.

You might live with the feeling there’s something disgusting about you. You link the shame to what happened to you long ago, particularly if you blame yourself.

This is part of self-hate. You mostly hate your needs. You’re not supposed to need or want anything — like love. If you do, you think you’ve exposed something awful. Your needs for love are confused with being abused.

Deep down inside, you wonder if it was your fault. So, if you need anything, you feel you’re doing something wrong to show this part of yourself.

Now, you even berate yourself for things that weren’t (or aren’t your fault). Even if you find yourself in difficult or unwanted situations as an adult or teenager, it still isn’t your fault. These early traumas live inside you.

And, when you’ve been sexually abused or had any childhood trauma, one of the after-effects is to have experiences that seem to repeat the early feelings and fears.

Shame is the reason you’ve had to keep secrets, to close off normal needs and desires, and to live a life of hiding. You don’t really believe that none of it was your fault. Now, you don’t believe you are lovable.