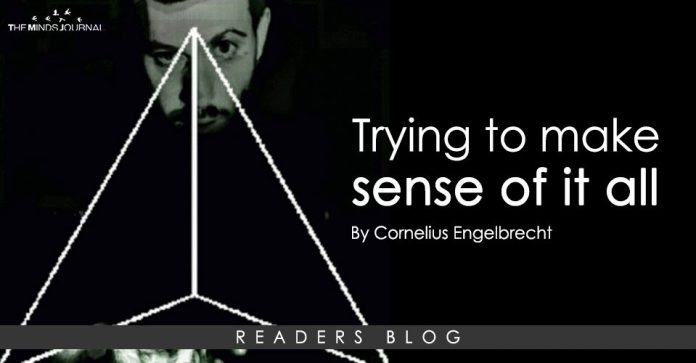 Trying to make sense of it all

Contrary to popular belief reality is not a mere string of random events, seeing is far from believing, and belief is a bias just as any other fallacy that we uphold. By our mistaken view that life is and end to a means, and that reason is a result rather than a presence shared in relevance we perpetuate the lunacy of our reality, and deny

By our mutual consent we empower the notion of delayed reward, of winning as a viable objective, and victory as an end to a means.

As a collective consciousness the issue of who’s to blame and why is irrelevant. Our unmitigated support of the fabricated fallacy we founded on a litany of half truths and fear has bequeathed us a reality that consider freedom of choice as a basic human right, but what the choices are that matter nobody knows, and those they say don’t.

Reality is a resonance of relevance. A mutual present sense we share intent to clear and present view. In light of the view that no one ever told you, or someone told you the end is neigh and promised you salvation in exchange for a bowl of lentil soup, you are the least to blame for what happened in the past.

Just as much as self-fulfillment has no relation to success, recognition, accolade or social norm, the value of your worth has nothing in common with your social profile, currency or coin.

But as the mounting proof of evidence refute all of the biased perspectives and conform to mutual common sense we are slowly waking up to what is real, who is right, and what is wrong.

So here is why I feel myself entitled to question your choice when I have no incling of the burden you bear, no insight to he sorrow you know, and hold no veneration to the regrd you demand. Because I care to see a reality shared in serendipitous wonder by all.

Fretting about fear, suffering the anguish of guilt and shame or bearing the brunt of blame seem hardly worth living, but explain why the pervasive mood of our society lack of flow, and why you yearn for something desperate, but all you need is some fun and play.

Living life well is much less serious than what we have been led to believe. Much more rewarding than what we can possibly conceive, and infinitely more satisfying in the serendipitous flow of a presence shared, just as nature intend all along.