What Is Treatment Resistant Depression: 7 Ways To Help Cope 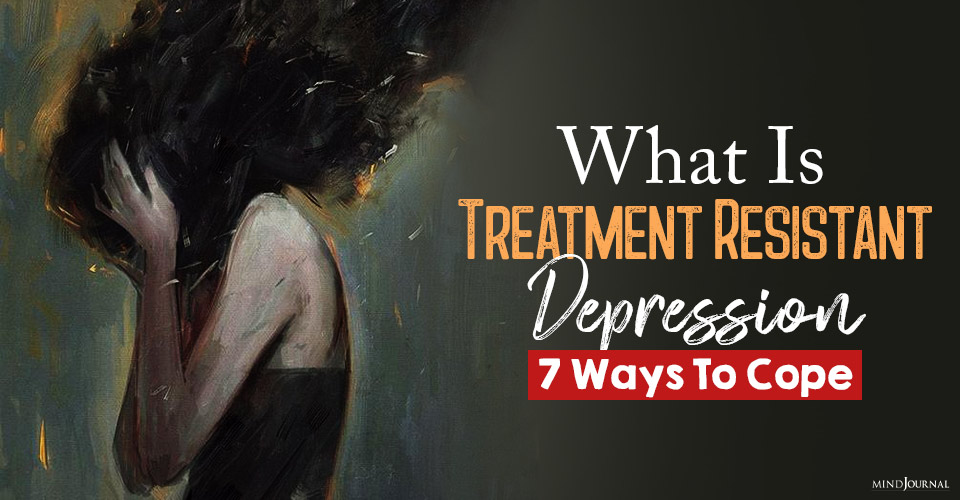 Here’s more to know about each of these two particular individuals:

Client A is a long-term client who decided to work with a holistic therapist because his husband was threatening to leave him if he didn’t.

For six years, he’d met with his primary care physician for the first course of anti-depressants, which didn’t work. He then went on to other psychiatrists — four, in fact — hoping to find just the right pharmaceutical cocktail with which to toast a new happy chapter.

Deep in his gut, he told me he’d wondered if he had a real chance of whipping his depression, as his parents and grandparents had suffered from the same throughout their adult lives.

Client B arrived in my waiting room a day early.

Embarrassed, she apologizes, saying, “I just feel so down and anxious and overwhelmed that I don’t even know what day it is.”

She’s a relatively new mom, 14 months into it, whose history of anxiety-based depression is pretty minimal. She was what she describes as “blue” and anxious as a teen, but played competitive tennis to handle it, so she felt no need to see a psychiatrist for her condition back then.

When her first child was born after twenty-two hours of labor managed by an angelic and skilled midwife, she felt increasingly moody. The psychiatrist she began seeing is known for successfully matching meds with patients, but it’s been a year now, and after four tweaks trying to find her the right medication, she’s found no full relief yet.

What’s the next step for managing treatment resistant depression in such cases?

One of the first questions I ask clients with TRD is whether their psychiatrist has mentioned repetitive transcranial magnetic stimulation — also known as rTMS or simply TMS — and if so, if they’ve determined whether they are good candidates. Usually, their psychiatrist and I will also touch base on this, as only a physician is able to prescribe this form of treatment (which may be covered by health insurance).

I raise this because, while some people with treatment resistant depression will want to start by making holistic changes, they can’t because their brain chemistry won’t cooperate.

Repetitive transcranial magnetic stimulation is an evidence-based neuromodulation technique that gets added to a patient’s current medication regimen, and which modifies neurotransmitters in the limbic region of the brain. It is noninvasive, meaning it does not involve any type of surgery or surgical process, and therefore also does not involve either sedation or hospitalization.

The technique works by generating magnetic pulses that penetrate brain tissue and induce electrical currents that can correct imbalances in neuron activity, often leading to improvements in symptoms that have otherwise been hanging on.

TMS therapy has been proven to be safe and effective in many worldwide clinical studies and is currently being tested for treating several other mental health and medical conditions. It’s exciting science for sure!

After a period of 4-10 weeks of receiving treatments, many people’s brain chemistry will reach some range of normalization. This means they can now proceed with other types of therapy mentioned above, as well as with other strategies and holistic life changes.

Here Are Seven Holistic Strategies That Help Sustain Wellness And Brain Chemical Balance If You Suffer From Treatment Resistant Depression.

1. Exercise on a regular basis

Related: 15 Art Therapy Exercises to Control Your Mind and Channel Your Emotions

Yoga is an Eastern-influenced practice that’s thousands of years old. It involves the mind, body, and spirit, using slow, purposeful positions and movements while also focusing attention on the rhythm of your breathing.

Related: Meditation and Yoga Can Reverse DNA Reactions Which Cause Stress

Nutrition has a direct biochemical reaction to our system. Harvard Health confirms that a rich, plant-based diet influences mood stability; and decreases the risk of depression happening or worsening. Ever had a blood sugar drop because you waited too long for lunch? Drowned your date disappointment in too many bobas with cookies? Notice your mood then.