12 Toxic Thoughts You Need To Drop For A Better Life 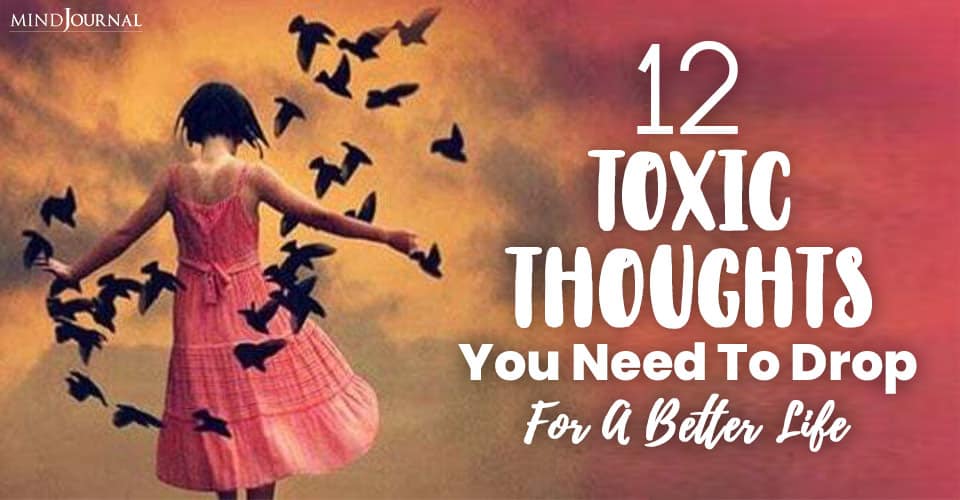 7. Feeling that you always need to prove that you are right.

I always wonder why people will fight to the death to prove they are “right.” What’s the point? I think it’s because they don’t want to look weak. Or vulnerable. Or stupid. But I think admitting you are wrong is a much more noble and mature thing to do. Besides, everyone has a different opinion. So why not have yours and let them have theirs?

8. Worrying about what other people think.

Why do you care? Do you think they are judging you? I’m going to let you in on a little secret. No one is judging you as much as you are judging yourself. Other people are too busy judging themselves just like you that they probably don’t even give you a second thought! So do what makes you happy. And if others are judging you, then it’s their problem, not yours. Ignore them and be happy anyway.

Related: Intrusive Thoughts: Where They Come From and Why

9. Thinking there is only ONE right and ONE wrong.

We live in a world where we like to think there is an objective reality. But guess what? Objective reality is an illusion. It doesn’t exist. Only subjective realities do. What one person thinks is the “truth” is not the truth for someone else.

For example—who’s right? The Republicans or the Democrats? Well, it depends on who you ask, right? Everyone thinks something is right because it fits their life and the way they look at the world. And that’s it. Period. End of story.

10. Worrying about the future because you feel unprepared.

I love this saying: “Worrying is like praying for what you don’t want.” And if you believe in the power of prayer, then you know that sending out thoughts and emotions into the Universe/God (whatever your belief system) works much of the time.

So instead, be here in the NOW. Now is all you have. So be present and stop worrying about the future because you can only control it to a certain extent.

We live in a capitalist culture that values money and achievement. We think that people who have a lot of money are somehow better than those who don’t. But that’s simply not true. I’m sure there are plenty of happy monks in the world who probably don’t hold a dollar to their names. Or someone working at McDonald’s maybe really happy while some billionaires aren’t.

So don’t fall into the trap of thinking you have to be rich to be happy. It simply isn’t true. Money is nice, but it doesn’t make you happy. Only you can do that.

Related: This Isn’t the Time to Accept Toxic Behavior From Anyone

12. Believing that the past determines your future.

Just because you come from a poor family, or made mistakes in the past does not mean that you can’t make your future better. If you have labeled yourself as a “failure” because of your past, then you will only continue your “failure” attitude into the future.

And if you’ve heard of the self-fulfilling prophecy phenomenon, then you know that what you think, you become. So like I said in the opening paragraph: “Change Your Thinking, Change Your Life!”

I hope that this article has made you think long and hard about the toxic thoughts that probably go through your mind every day. And I bet you didn’t even know it! So start paying attention to what you think, and when you catch your negative thoughts, hit the “cancel” and “delete” buttons FAST!