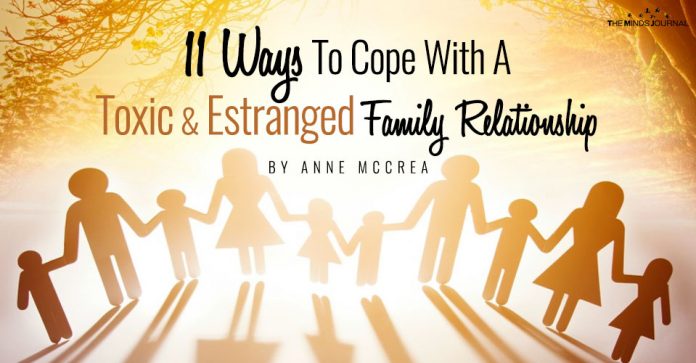 11 Ways To Cope With A Toxic And Estranged Family Relationship

3. Do not normalize toxicity.

If you have done nothing wrong, don’t forget it is not normal for anyone to continually be negative, inconsiderate, and hurtful toward you. It is very easy to lose perspective about what is right and wrong, especially when you are constantly justifying a person’s behavior with stories of their past traumas or hardships.

People tend to make concessions for difficult or estranged loved ones because they wish to forgive and forget, avoid conflict, or do not want to push the person farther away. Empathy is good, but it cannot be used to keep making excuses for terrible behavior. Sometimes you need to set limits and say “enough!” before such behavior becomes the new normal.

4. Don’t expect anything from your estranged relative.

Yes, you might expect your family to have your back because you’d do the same, but don’t count on it with an estranged relative with whom you struggle to maintain a relationship.

I’ve learned not to be dependent or expect any help from my sister, even though I grew up believing that’s what siblings should do for one another.

5. Realize it takes two people to fix a relationship.

As much as you try, if the other person is not ready or not willing, you may not fix much. The relationship will remain toxic for as long as the person is unable to change.

You cannot blame yourself for it. You have done your best.

6. Decide how much space you want to give them in your life.

You will probably encounter your relative again at family gatherings, or you may need to communicate with them about family matters. In this case, minimize the amount of time you spend in their presence and keep communication to a minimum.

Sometimes, though, you may need to cut them out of your life entirely, whether permanently or momentarily. Keeping a space open for them and constantly making the effort to reach out is emotionally exhausting.

Once you have deemed you have tried enough and done your best, don’t feel guilty about drawing the line and deciding that enough is enough.

Communicate your feelings to people you trust. If the person knows your relative, you may learn that they also share the same feelings of hurt and disappointment in dealing with him/her.

Talking through your feelings is therapeutic and helps you acquire perspective about the situation.

In my case, my parents also have a toxic relationship with my sibling, and I found that letting them talk about it and encouraging them not to bottle things up has been a great release for them.

8. Refrain from frequently gossiping about your relative, especially to a wide circle of people.

There is a difference between sharing your feelings with people you trust and constantly focusing all conversations on this individual and what s/he did or said. You risk getting into the habit of speaking badly of someone, and the conversation will often just keep going around in circles. Also, the negative talk can return to your relative’s ears and feed the cycle of negativity and estrangement.

Instead, decrease the mental and emotional energy spent thinking about your relative, and focus on the positive aspects of your life and your loved-ones’ lives.

Podcasts for kids are an antidote to increasing screen time when stuck indoors!
Read more
Abuse

So do narcissists really have a “playbook” used to manipulate you?
Read more
wpDiscuz
1
0
Would love your thoughts, please comment.x
()
x
| Reply