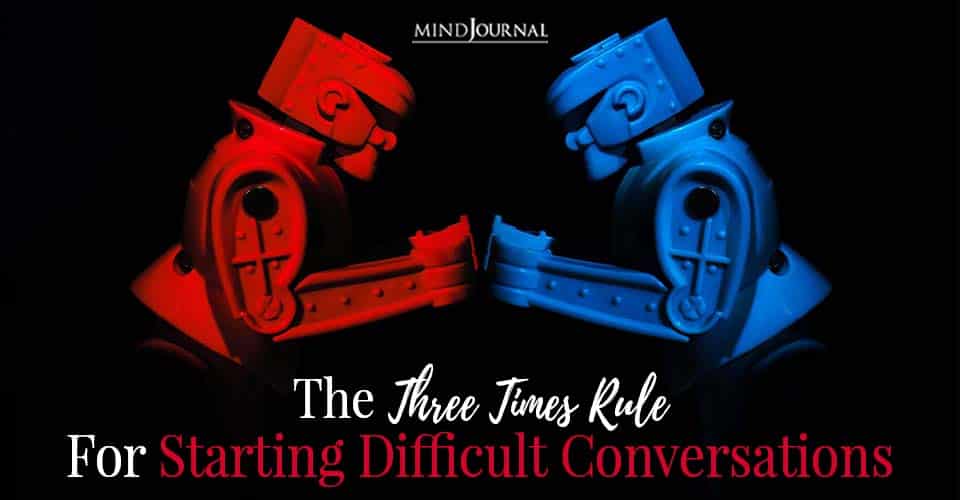 Second, tell them about the three times rule.

Doing so gives you a justification and it serves to “depersonalize” the reason for talking and is likely to decrease their defensiveness.

That is, the reason you are bringing this up is because of the rule rather than you are pissed with them.

Third, be open to the idea that what you were upset about might be the result of a misinterpretation on your part.

You will notice that I said that it was the way “a part of me heard it” rather than some absolute meaning that she clearly conveyed even if she denies it. This gives the conversation the space to go in a number of different directions.

Fourth, this conversation ended pretty quickly, which is fine.

The point was made and a new understanding was reached and the stage is set for the conversation to be returned to if need be. It is likely better for the issue to be raised briefly than not at all. And if it goes deeper and both parties are curious, accepting, loving/compassionate, and motivated in good faith, then it can be an excellent experience.

Finally, the initial goal with this kind of conversation is not to blame or judge, but rather to “call the field” (see here for more on this concept) and communicate that there was a disruption just so that folks are aware of the bump that happened. Being aware that there was a disruption does not necessarily translate into the notion that someone is wrong or should be blamed or that there was only one correct interpretation. I think one of the great interpersonal or socio-emotional skills is learning how to process these kinds of things and how not to get trapped in neurotic reactive cycles with others who we have conflicts with.