The Victim Identity: Signs and How To Recover 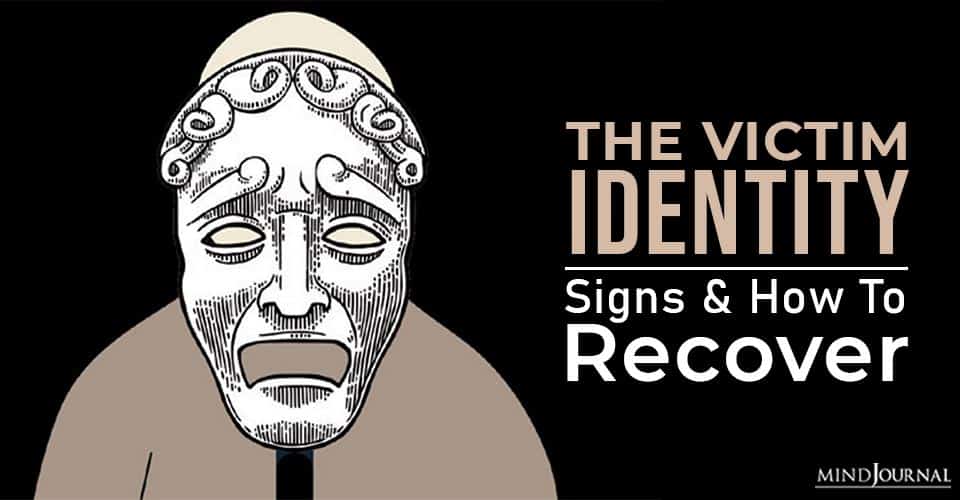 Being possessed of this tendency, as many of us are, it’s not so much that we will intentionally set ourselves up to be victimized by others, although that certainly is a possibility and is a reality for many people, but rather, that we will be more predisposed to interpret the acts and motives of others as being intentionally exploitive or deliberately harmful. There could be some truth in these suspicions, but the problem is that these expectations don’t always feel like suspicions, but rather they feel like reality.

Expectations can be questioned or examined. Reality can’t; it just is. Consequently, reinforcing a victim identity can produce a self-fulfilling prophecy in which we get to collect lots of examples that validate a worldview of victims and perpetrators.

While some degree of this tendency is present with most people, an extreme degree can lead to paranoia, which is a mental disorder characterized by delusions of persecution and mistrust of others, without evidence or justification.

Hopefully, most of the people reading this are not that far over to that end of the spectrum, but that doesn’t mean that an attachment to a victim identity isn’t to some degree diminishing one’s ability to create meaningful and fulfilling relationships.

Breaking the habit of feeling like who I am is a victim, as opposed to having had an experience in which I felt victimized, like all other ingrained habits is easier said than done.

The reason being that like all other unhealthy habits, there are some benefits and rewards that are inherent in the pattern which often appear to outweigh its negative aspects.

Some Of Them Include:

1. The feeling of greater security comes with a sense that I’m aware of dangers that are lurking. Suspicion puts one on guard that feels less vulnerable than being blissfully unaware

2. A victim is less responsible for avoiding danger and thus can’t be blamed when he or she is taken advantage of or harmed by another.

3. Victims generally have a tendency to carry resentment and feel justified in retaliating at those who they feel they have been abused or exploited.

4. Victims often feel morally superior to perpetrators because they feel themselves to be upright and incapable of ever intentionally engaging in hurtful actions towards others.

5. Holding myself as a victim relieves me of the need to assume any responsibility for the part that I may have played in leading up to the experience that I had.

6. Victims are immune from blame.

Read: 23 Signs You’ve A Victim Mentality (And How To Deal With It)

The Downside Of These “Benefits” Or The Price That Must Be Paid For Them Is:

1. A feeling of powerlessness that inevitably comes with the denial of responsibility.

2. Prolonged feelings of self-pity and resentment that can inhibit the willingness to be vulnerable and fully emotionally available in relationships.

3. A preoccupation with doubts over one’s ability to provide responsible self-care for oneself.

4. A diminished capacity to accurately assess the trustworthiness and intentions of others.

5. A likelihood of feeling increased feelings of loneliness and disconnection that if fostered by a growing sense that the world is a dangerous place.

4 Ways To Recover From The Victim Identity

For those who wish to recover from a victim identity, here are a few guidelines that can help to free you from its grip:

1. Cultivate friendships with people who do not reinforce your feelings of being a victim.

When sharing your feelings and concerns, particularly those related to relationships, be sure to request that they not just provide you with sympathy and agreement that you were unfairly mistreated, but request that they try to help you to see ways in which you may have been complicit in the breakdown that you experienced.

Ask them to help you to see what lessons there might be in your experience that you may not have recognized and how to apply them in the future. Friends and family often mean well but may be blinded by their loyalty to us, and their distress in seeing us suffering.