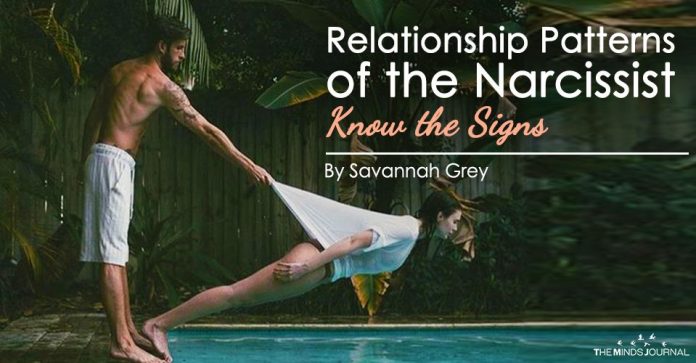 The Relationship Patterns of the Narcissist: Know the Signs

This is another deepening technique they use and if you’re a codependent, with a huge heart and a lot of empathy, then this one’s for you. They’ve got a story for why they’re fed up. Someone did them wrong. It’s never their fault and they are always the victims of another person’s cruelty. When you share something painful and traumatic with an empath, that’s their sweet spot. It triggers their fixer button and it encourages them to listen closely, open up and share their own stories. This further deepens the connection, it builds trust and it inspires, in the fixer, a need to care for, tend and heal the wounded soul they’ve become enamored with. A fixer takes on the added responsibility of helping to heal this hurt. It is also an excellent kind of future alibi for someone with bad intentions. (“I told you I was messed up.”)

5) They Start to Give You Subtle Warnings:

“You’re too good for me. You can do better than me. I’m not good enough for you. You deserve better.” All of these may sound sweet, even a little humble, but this is as close as a Narcissist will ever get to telling you the truth. You’ll brush it off as a cute little endearment, but the reality is that these statements are warnings. They know who they are and what they’re up to and they know they’re keeping secrets from you. Don’t ignore this.

6) They Start to Play the Pull Away Game:

After spending a lot of time convincing you that you are perfect, they start to pull away. They may disappear for hours, or days at first and you start to think that you’ve done something wrong to evoke this kind of change in them. It’s sudden and severe and comes out of nowhere. The fall from the pedestal they placed you on is earth shattering and you’re scrambling trying to make everything okay again. The more you try to communicate and smooth things over, the further they distance themselves from you. You are heartbroken and reactive and you’re desperate to right the ship and you’re doing things you wouldn’t normally do, in order to bask in their spotlight again and nothing seems to be working. You’re in full panic mode, desperate for someone to throw you a life line.

This is a dangerous stage and it’s how addiction forms. Any good drug pusher will tell you the best way to get someone addicted to something is to give them a taste, get them hooked and then threaten to take it away. That’s exactly what’s happening here. You’re soaring when they come back, with promises of love and change and then you’re crashing when they abandon you again. This cycle could go on indefinitely, until one party decides to end it. They can and often do put one source of supply on a shelf, while they pursue another and then come back when their new endeavor fizzles out. The psychological warfare that they have perpetuated against you has rendered you addicted, dependent, broken and has robed you of your sense of self and your self-esteem. You’re a mess inside and you’re barely functioning and keeping things together. All you want is for them to come back. You’ll forgive everything they’ve done to you, just as long as they come back and give you another fix.