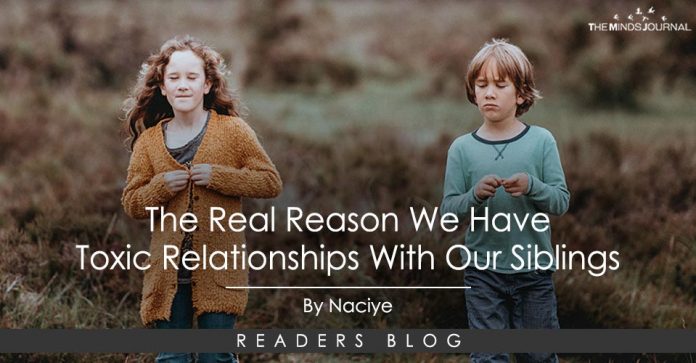 The Real Reason We Have Toxic Relationships With Our Siblings

I can’t really remember when it first happened. It happened slowly and over time. Now it’s got to the point, where we just can’t stand each other. My sister is a classic bully, both at home and at work. She truly is a nasty piece of work, but she needs help.

She flits between the roles in the drama triangle in such succession, that unless you are skilled in Psychology, you won’t understand what she is doing. Her behaviour is manipulative and toxic. She behaves as the persecutor, and quickly switches to victim mode, to get the sympathy of those watching. When this doesn’t work, and she is challenged, she takes on the persecutor role again. When I try and explain what I have observed, she becomes dismissive and angry, attacking me.

It is difficult to accept that someone can get to almost 50 years of age, and has no self awareness. She displays all the usual defence mechanisms, such as anger, projection, displacement, denial etc. She uses her assertiveness as a tool and wages war at all those she comes into contact with. As a result she has few friends and hasn’t been able to hold down any job, as she gets fired for her angry outbursts and violent demeanour.  Although she readily projects her toxic behaviour onto me and refuses to look inward to heal herself, a part of me wonders why she became this way? Although I’m too angry and hurt to try and help her myself, I know that she needs help.

The youngest of 3 children, she was always very independent and wanted to exercise her only thoughts and feelings. Growing up as a second generation immigrant child, she was suppressed. She wasn’t allowed to do the things she wanted to do, such as go out with her friends, with boys, study Art etc. Over the years she has become angry.

Where is this anger coming from? Who is she angry with? It appears that she feels worthless, that she isn’t good enough. She feels that no one will accept her as she is. On top of this, she was always compared to me, and feels that she cannot live up to my expectations. She feels that I’m the ‘goody two shoes’, who’s been put on a pedestal. She’s always been seen as the bad one and again not good enough.

I understand that she feels alone, and unworthy and has low self respect and low self esteem, so she dates undesirable men, that don’t commit to her, and confirm her belief that she isn’t good enough or worthy enough. So really maybe she’s angry with herself too? She uses her anger as a defence mechanism.

She is passive whilst I side with her, but as soon as I give her my opinion, she hears a judgment. She cannot handle anyone disagreeing with her, she becomes angry and aggressive to protect herself. I struggle to empathise with her, even though we had the same upbringing. The interesting thing is that whilst I internalised the conditions of worth placed upon me, and conformed, she rebelled. As a result she is angry with everyone and our sibling relationship has broken down.