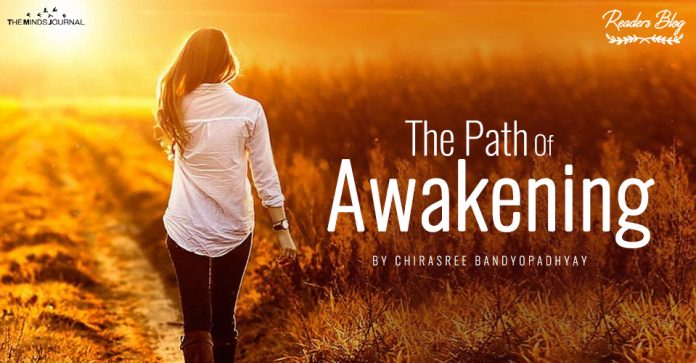 The Path Of Awakening

I had been a rebellion back when I was growing up. I would always get into conflicts with my parents, quarreling for what is just and what is unjust. I was at an end being a mirror every day to my parents trying to help them figure out where they were going wrong. I had been societally appropriate as a child because I had what is right and what is the wrong outlook based on what the society had taught me.

I grew up with negligence. I would hear my parents fighting like hooligans. I would also hear recurrent sounds of slaps or flying slippers ending up on my mother or on me. I would be frustrated. I would disdainfully blame alcohol. As a child, I would repeatedly ask my mother to get married again and simply get me a better life.

I would rant and be dejected. I would end up being a shy, mysterious, creepy, silent and annoying child in school holding every quality to get bullied. I would come back home only to weep and fear to not go to school regularly. The process continued and I began to detest going to school. I was unheard because besides being shy, I was equally embarrassed by my strange personality. I didn’t quite know a way out.

Decades passed and the situation strikingly remained the same. I had now grown up to an adolescent, well aware of a lot more things than I was, as a child.

I began to spot messages of other men on my mother’s phone. I strangely began to grow hatred for my mother. The only friend I had made in all my life, the only person who seemed to listen to me eventually got a life beyond me. I had never been close to my father. I would be stormed with abuses, comparison with my cousins or be just beaten up by him. As a child when I would be asked who loves me more, my mother or my father, I would bluntly answer, ”My father doesn’t love me.” I had no man to set an example as the inspirational man in my life.

I grew tired of checking her messages and fighting with her. However, I had not reached the maturity to know my family issues or understand the psychological issues of a woman at the age of thirteen.

I grew up a little and all I can tell you is that I began to fall in love with the concept of love. I loved the feeling of togetherness by the time I was fifteen. I had my first relationship back then which of course didn’t work out. I grew up to be an insecure, obsessed girlfriend to whom the relationship was the most important thing in life.

The more I grew, I began to get close to my mother. I would realize the emotional needs she required. I would understand the reason for her unending phone calls. I would understand the reason for the messages I had grown up reading. I would come across conflicts what extra-marital affairs can lead to. I had been dumped too once by a boyfriend who was scared to know that I have parents who have boyfriends and girlfriends too.

However, I grew up only to increase the number of boyfriends’ list in my life, getting serious with almost most of them, being extremely loyal, loving, caring a girlfriend. I had extremely low self-esteem and would often be over-possessive in my relationships. A lot of times, it became a reason I was left alone. I didn’t know what the sources of my problems were. I didn’t know where the strength seeking urges arrived from.

However, I finally began to realize things and bring in changes in my character. I fell in love again and again. The last time I fell in love was perhaps for the longest. I was in a two and a half years relationship. I was in extensive love and had been a girlfriend who could do anything for her man. I had been miserably hated by his parents for my family. I had been judged. I had also been redirected to psychiatrists during the relationship. I had been physically abused the endless amount of times but I still chose to stick around. I have seen my mother too being beaten up and being physically abused, so it became just a normal thing to me.

In two years I transformed finally to a much-matured human who can tell you how the dots actually connect.

I had been beaten up by my boyfriend time and again and didn’t lodge a complaint  I couldn’t because I was in love and wouldn’t be able to tolerate that he would have his life doomed for eternity.

However, after this incident, my life completely transformed and this is what I have to tell each one of you out there.

A lot of us feel jealous during a relationship. Instead of blaming your partner or blaming yourself. Try to figure out the root of the jealousy. I would have breathing problem around my partner when he had too much of attention to give to others of the opposite sex. I realized later that it was an outcome persistent craving of attention since my childhood.