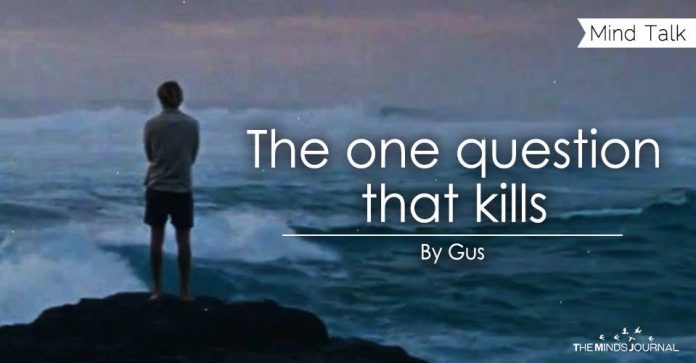 The one question that kills

I, like you, probably get asked a lot of questions throughout the day. None bother me really, ask me anything. One question that really pisses me off and a question I don’t quite understand is: Why?

If you are going to ask the question: Why? You can ask yourself. Sure. Go ahead. It might even be a good idea most the time. Don’t ask other people why. It’s annoying. I think it’s kind of rude as well.

I like to walk home from work. I like to write. I get excited by a new bakery in town. I do random art things. I like tartar sauce on my fries. I like going to the bar. I don’t want to meet you later, I’d rather stay home. I drink enough coffee that could probably kill the average person. I drink my coffee black.

I’ll answer you like I answer everyone else. “Because I fucking want too! How about that?”

People do and live as they please. Unless you’re five, keep the why question to a minimum.

Have you thought that maybe people do these things because it’s who they are?

Just like you drive with one foot on the brake and one on the gas. If I were to ask you why? You’d probably answer that you were taught that way or that’s the way you’ve always driven. That would be the obvious answer I’d be expecting so I wouldn’t even ask. Would I honestly think that you were going to look over at me, smile and say “I just like to be an asshole”.

If you did answer that way, we probably are good friends or are on our way to a great friendship.

If you’re a parent… That’s a why question for ya right there… and you constantly asked your kid, Why? How do you think that kid is going to be as an adult? A self conscious, loser with no confidence. That’s who. If a child has a genius moment and a random idea. Build it up and ask how will you carry this out? Don’t ask why. You may as well just say, “Wouldn’t you rather sit on the couch and do nothing. Work a miserable job like daddy and never have enough to retire because you’re in debt up to your asshole?”

Asking why makes us second guess ourselves. All the confidence we had just went out the window. It ruined your idea before it even got started. Now it probably won’t get started because some asshole shot you down with, Why?

Asking why also places judgement.  Why do you stay at that job?  Why can’t you find a better one?  All wonderful questions.  To make you feel like a loser.  Asking a why question is putting someone on the spot as to who they are and what they choose in life.  You’re questioning or judging their decision.  Leave people alone or…

Learn from above and just reply with, “Because I fucking want to!”

It’s the little things people do that makes them the odd, interesting, weird, eccentric and humans that they are. We all have our thing. I am definitely in no position to judge when it comes to being eccentric and weird.

“You don’t have a say. Just let it slide and close your eyes and watch the passion play..” – It just happens, Roxette

Quit asking why. Let life unfold as it is. You don’t really have a choice anyway. As the old saying goes – If you can change it, do so. If not, accept it and move on.

Kill the why In life… Read more »

Ending Possession The color of her eyes, the stench protruding from her pores, her voice when she spoke was raspy and monotone.
Read more
wpDiscuz
1
0
Would love your thoughts, please comment.x
()
x
| Reply