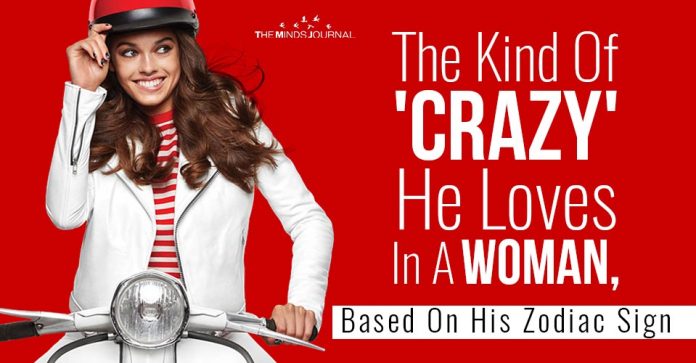 The Kind Of ‘Crazy’ He Can’t Resist In A Woman, Based On His Zodiac Sign

A Scorpio man loves a woman who is sex crazy.

Why? Because he loves having someone who is as passionate, intense, and sexual as he is.

Sagittarius men love women who are ready to go to a foreign country at the mere suggestion of it.

She doesn’t want or need a house in the suburbs; she’s more than happy to see the world without ties.

Capricorn men love the kind of woman who is responsible.

She knows where every penny she spends went and has perfectly balanced bank accounts and 401ks.

Aquarius men love women who are a bit off-kilter.

You know, the type who marches to the beat of her own drum. She has the type of crazy that’s individualistic and expressive. She doesn’t dress or look like anyone else; she’s one of a kind.

Looking to know more about the zodiac signs and how they are when it comes to relationships? Read What A Man Looks For In A Woman Based on His Zodiac Sign

Pisces men love women who are the kind of crazy that inspires creativity and art.

They are the muses who don’t just inspire others to act or write or paint, but who also express themselves through art.

So, there you have it; these are all the zodiac signs and the kind of ‘crazy’ women they like. Let us know in the comments below if you are one of them!

If you want to know more about the kind of ‘crazy’ he likes in a woman, then check out this video below:

There will be days when you have to rummage through the heaps of negativity in your life just to find that nugget of positivity. Make it happen and stay positive. What is a good reason you should stay positive based on your zodiac sign?
Read more
wpDiscuz
0
0
Would love your thoughts, please comment.x
()
x
| Reply