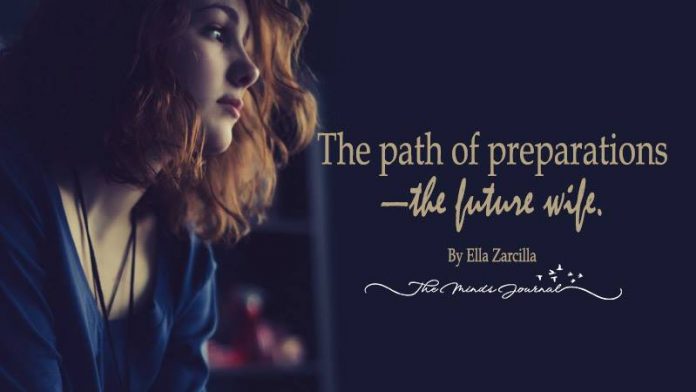 The path of preparations—the future wife

This is my other persona who wanted to be heard, on being independent and a woman who wants to be a wife, someday.

Both of us are in the platform of “the-not-so-rushing-couple”, pretending to control the selfishness on our heads. There are times when envy strikes my capacity to be patient while most of the time, the insecurities in the future. We are old enough to dream about our lives together but still too young for others for us to be together. Our parents and elders would like us to achieve our own individuality first before we pursue marriage as the destination. So in the meantime, we are flowing naturally.

Call us, or rather, call me a realist but for now, would you mind if we can talk about some of my ideals?

At first, I was looking for a man who has the same faith as mine. Who can go to church with me and be part of a ministry, a person on whom being godly is a calling. That when it comes to courtship the blessing of not just my biological family will be given but more than that, the blessing of church leaders on our congregation as well. I was dreaming of marrying a man who supposed to be someone in between a Christ like spirit, a man who will respect my body as a holy grail, righteous— godly. I thought that this is a form of a perfect man. A physique in which my womanhood will be delivered purely. He is my ideal man and this is the reality I’d grown up with. Isn’t it a beauty to be with a man who has the same view as yours? That you both will go to heaven, be saved and guided by His lordship? I was expectant that a man like this is perfect, no, let’s say “that a man like this is worth it”, but I was so disappointed because human nature is different. We may be part of a religion branded by a church but the goodness of a person won’t be seen only there.

Seasons changed and I am too so as maturity passes by, I evolved and still evolving. My consciousness was being transcended to something deeper, biases became different and my spiritual path went to a road less traveled by.  People started questioning me, church friends doubted me. But the most painful of all about exploring someone’s belief was that I began to doubt myself, my intuition and growth. That me not being fitted into the pattern will be a form of rebellion. I almost lost my own self, mostly losing my authenticity.  Then I realized that, when a woman is independent or has a strong will to be different the majority doesn’t want to pursue her whether it is something about one’s passion, career, beliefs, culture and the like; maybe because she can speak her mind or maybe because only few wants to evolve.

Undermining the consequences, I climbed into knowledge and fell in love with a human— the opposite of my ideal, my man for 7 years.

He is a man who wants to be involve into skepticism. Questioning things about life and how wonderful having a partner is by appreciating the universe through their eyes. He is someone I admired when it comes to understanding people for who they are but at the same time for not giving and accepting bullshits from them. Not a perfect man, not godly nor righteous— he is a man, a human; flawed.  This is what is ideal now, he is my reality. The memories that we built and all those funny public affections were the simple pleasures that I will treasure. Like shouting on the top of a cliff so does my heart is embracing the intensity of attraction, chemistry and love.  By knowing him each day is understanding the faces of a god.

Seven years of not rushing is worth it. Loving myself and sharing it to him is indescribable. Whenever he smiles authentically, my soul rejoices. He gave me the reason to trust and to play the trusting pattern of the truth. He is the kind of monster on whom I am willing to be tamed. By taming me, loyalty prevails.

Ella Zarcillahttps://secondvoice29.wordpress.com/
An introverted woman, a writer and a weirdo.
-Adverts-

Ending Possession The color of her eyes, the stench protruding from her pores, her voice when she spoke was raspy and monotone.
Read more
wpDiscuz
1
0
Would love your thoughts, please comment.x
()
x
| Reply