The 8 Types Of Guys Who Don’t Deserve You 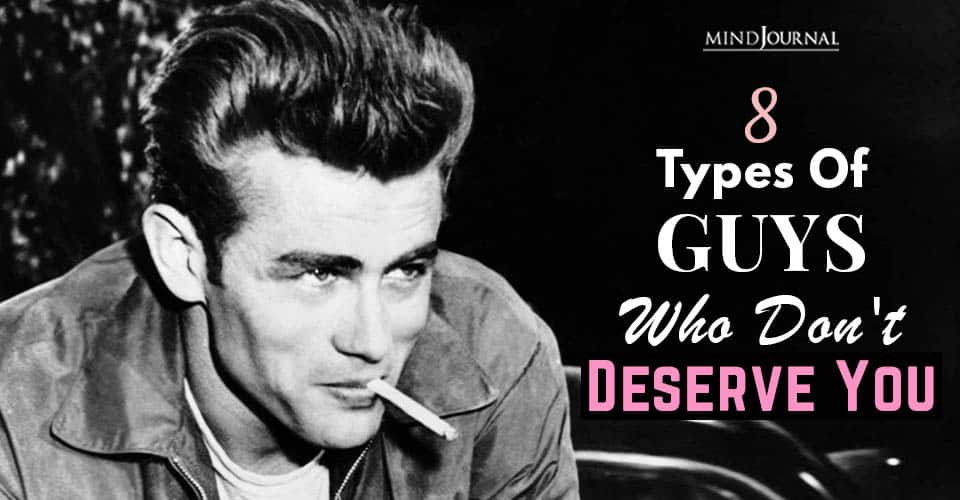 5. Guys who don’t respect your opinions.

In a healthy relationship, both partners’ opinions matter, and no one is superior to the other. So if a guy ignores what you have to say and thinks that only he can make all the decisions, then it’s time to goodbye to him for good. You deserve to have a say in everything that happens, just like him. But if he always disregards your opinions then he is not the right one for you.

When you meet a man who is not interested to know what you think and feel, then he is not interested in knowing you. And what even then is the point of being with someone who doesn’t even feel an ounce of respect for you? He might pretend to listen to what you have to say, but isn’t that worse? Guys like this don’t deserve you at all.

6. Guys who try to control you.

Believe it or not, even today there are many guys who think that women are theirs to control and that women should always come second to men. So if the guy you are interested in tries to control you then that’s a huge red flag. If he tries to control where you are going, with whom you are talking, what you are wearing, how you are conducting yourself, etc., then pack your bags, run and never look back.

If a man tries to dominate you and rule over you to feel happy, then there is something extremely wrong with him. Don’t try to change him, because you will just be wasting your time. He will only try to control you and walk all over you, so get out of this before it’s too late. You are nobody’s to control.

7. Guys who lie through their teeth.

When it comes to dating and relationships, lying is an absolute dealbreaker, and it is something that should never be entertained, nor accepted. If you have a feeling that your man lies to you, then slowly move away from him. If you have always tried to be honest and transparent with him, then you also deserve the same. When he is lying to you left, right and center, then he is never giving you the respect you truly deserve.

When someone constantly lies to you despite you giving them a million chances to redeem themselves, then it shows that he only cares about himself. He doesn’t care about your feelings and emotions at all. So, why should you be with someone who will always gift you with lies, deceit, and betrayal? Don’t you deserve to be with someone who will never make you doubt him or leave you wondering as to what he is up to?

Cheating is an absolute no-no when it comes to dating, and you should never try to make your peace with it, no matter how much you might like someone. When someone cheats on you, it is their way of showing you that they don’t care about your feelings and probably never will. Do you really want to be with someone, who will make it nearly impossible for you to trust him?

If he has cheated on you once, then chances are he will cheat on you again. After all, once a cheater, always a cheater. Leave him, and protect your heart from any more pain. Guys who cheat on you don’t deserve you even a little bit.

After everything is said and done, there are a lot of good men out there and it is okay if you take some time to find the right one. It will all be worth it in the end.