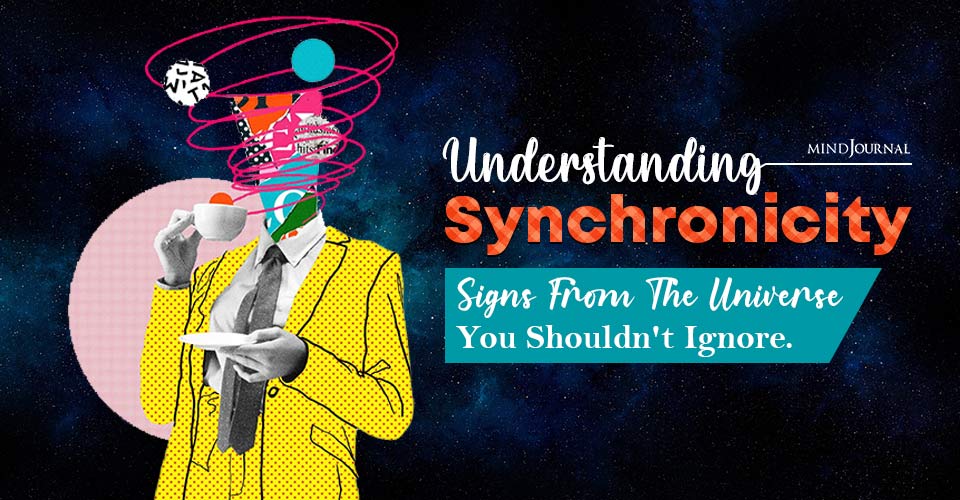 My examples get less profound from here, but they are synchronicities nonetheless. Here’s another thing my daughter left on the floor. It’s a sticker of a cartoon eye that came from some kit she had. And of all the possible stickers I could see out and about, I saw that same exact cartoon eye on the ground at a water park a few days later.

I was sitting outside at Starbucks the other day (a common theme with me) and I stopped working for a moment and thought, “I feel good.” About two seconds later, James Brown’s song of the same name came on the radio. I spend a lot of time at Starbucks and I hear the same songs again and again. I’ve never heard that one before (that I can remember) and I haven’t heard it after.

Related: 7 Synchronicities and Why You Should NEVER Ignore them

In addition to any specific synchronicities you may experience, there are common ones that impact us all.

There are times you’re thinking about someone and they reach out to you out of the blue. Or the times you think of a song and it comes on the radio. Repeating numbers are common synchronicity for many people.

And then, there are answers to questions you’ve asked that suddenly appear out of nowhere. I can’t tell you how many times this has happened to me recently. My answers usually come from a Quora email where someone is asking the very question I was just contemplating or a YouTube video that pops up on my homepage where someone explains exactly what I needed to know.

Synchronicity And The Law Of Attraction

If you aren’t familiar with the Law of Attraction, made famous by the movie, the Secret, it refers to the idea that your thoughts become things.

If your thoughts become things, wouldn’t it be natural to manifest things that have been on your mind? In many cases, maybe synchronicities are nothing more than the Law of Attraction at work. You think of a person and then they call you. You sing a song and it plays on the radio.

In this case, I think it’s safe to assume that when you’re seeing synchronicities that originated from your thoughts, you’re on the right track. You’re likely vibrating at a high level and naturally attracting these random little things.

Related: What Is Déjà Rêvé? Why It Is Creepier Than Déjà Vu

From my experience, these things happen in waves. The four examples I’ve given were all within a 1-2 month time frame. And it was definitely a time of transition for me. I can guess the reasons for each of these things, but I don’t really have the answers.

I do believe that this is a very personal thing. So if you think synchronicities are there to deliver a message, start paying attention. Try to remove judgment and follow your intuition. You really have nothing to lose.

Now, I want to hear from you. I love hearing about synchronicities. Tell me all about yours!