Sun and Sabbats: The 8 Most Important Wiccan Holidays 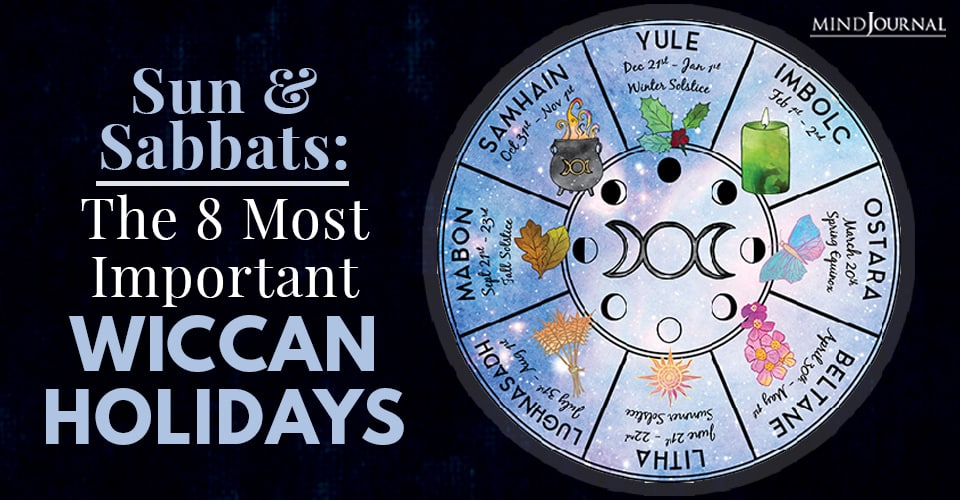 Held during the winter solstice, Yule is also referred to as Midwinter. It is the shortest day and the longest night of the year. It is recognized by most Wiccans as the beginning or the end of a year. A celebration of the sun or fire as a source of life, it is a festivity of hope and renewal. Yule portrays the return of light and the sun as well as the rebirth of the Horned God, the newborn solstice sun. The newborn sun provides a fresh new start during Yule. Trees that thrive in winter are decorated with food items as it depicts life and constant growth even during the harsh cold nights.

Many Christmas rituals and traditions are adapted from Yule like the use of yule log which is considered to bring good luck by banishing evil spirits. Moreover, the use of mistletoe during Christmas also comes from Yule. The celebration and rituals largely vary between covens, witches and solitary practitioners. During this period, spells on love, happiness, peace, and harmony are cast.

Related: The 7 Levels of Spirituality – Where Are You?

Literally meaning “in the belly” in Gaelic, Imbolc is also known as Brigid’s Day, Imbolg and Candlemas. This marks the preparation for spring and all Wiccans focus on organizing and cleaning their homes and living spaces along with their minds, hearts, and souls. Being the midpoint of spring equinox and winter solstice, Imbolc celebrates the return of spring and the rekindling of inspiration and creativity. Imbolc is a celebration of new growth, new possibilities, emerging life, and pure joy.

Brigid, the pagan goddess and maidens are revered during this festival as they are associated with fertility. During this time, animals and crops are blessed to remain healthy and abundant throughout the year. The first buds of spring also signify the arrival of a new life. In honor of the sun’s rebirth, most witches light ceremonial candles in different rooms in their homes after sunset. Many practitioners also gather together with their circles and covens to feast, reflect, share and laugh. This is the time to clean your energy by casting different cleansing spells.

Derived from the name of the Saxon Lunar Goddess Eostre, the festival of Ostara, also known as Vernal, Spring Equinox, Eostar or Oestarra, signifies the ritualistic arrival of spring. During this period, the New Moon represents fertility, birth, & renewal. This is portrayed by the imagery of the hare & eggs. The goddess Eostre is also the inspiration for the Christian tradition Easter which is also associated with the hare and eggs. The theme of this celebration is new life and growth as the days become warmer and longer during this time.

Ostara is considered as a celebration of balance as it is a day of the equinox. This is a day of gratitude, new beginnings, blessings, magic and setting new intentions. Wiccans tend to plant trees, sprinkle seeds in their homes or altars, bless plants and cast spells on balancing and spring.

Related: Angel Numbers: Spiritual Significance Of Repeating Numbers And How They Guide You

Also known as the Festival of Fire, Beltane signifies the midpoint between spring & summer. The term Beltane is derived from the “Bel”, a Celtic god, and the word “tane”, which in Gaelic translates to fire. Celebrated on the eve before May Day, it is the jollification of fire. During this sabbat, different earth energies tend to be at their peaks and it is believed this day is charged with sexuality and fertility. Hence, fire is the theme and flames are the symbols of this Wiccan holiday. As a ritual, the coven will extinguish all fires that have been lit and only a special, specific fire will be lit to celebrate the feast of fire.