Why Strong People Face The Most Difficulties In Life 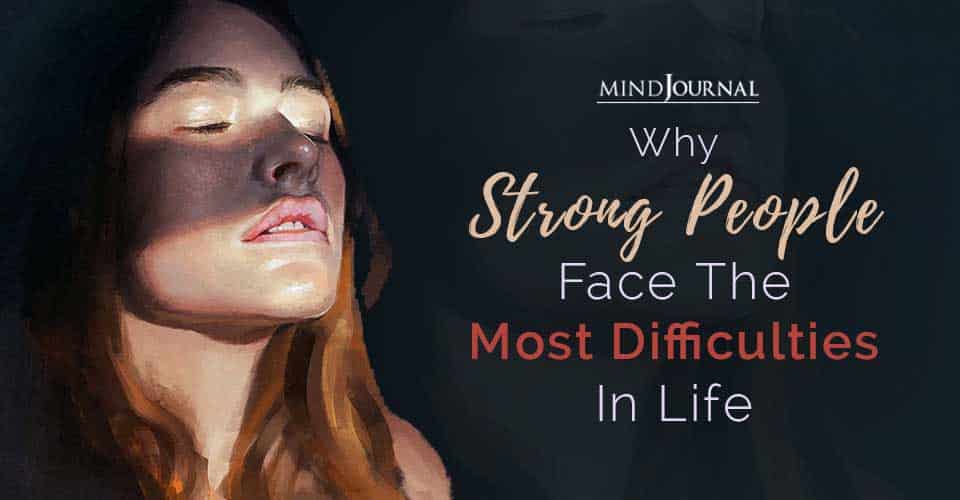 Struggles and hurdles are inevitable. Everyone has their own way of dealing with it. Take it this way, a person might choose to run away at the first sign of trouble another might try to get through it. What happens here is, the strong person doesn’t believe in escapism. Strong people face difficulties and misfortune too.

Misfortune doesn’t choose anyone; everyone gets to control their life.

With strength comes empathy and compassion.

Strong people have been through the hardest of times so when they see someone frustrated and angry, they see the sadness and hurt behind that. Strong people are intelligent and can see through the facade of lies. If you are trying to deceive a strong person, you better think twice.

Related: 15 Traits of A Strong Woman

Having gone through so much all by themselves, they are extremely kind to others. They see what you don’t want them to see – your insecurities. Deep down they know, even they have built their fortress of power and courage, defeating their own insecurities. The strong people are different from the weaker ones on the ground that the strong people will never give up the fight, in spite of all the sufferings and cruelties inflicted on them by the harsh world. They are constantly evolving.

Narcissists create a wall of defense around their vulnerable and insecure self by holding grandiose and supreme ideas about themselves. During childhood, these people fail to build a positive and compassionate bond with the primary care-givers. This failure to make a warm attachment with the primary figure gets reflected in their later lives as they get incapable of forming a congenial contemporary relationship with their partners.

They end up exploiting other people of their love, affection and kindness as compensation to what they experienced as a child: desolation, abandonment and deprivation of warm. People, who are sensible and loving, inadvertently fall prey to the toxic trap of the narcissists and work as their narcissistic supply. Being a narcissistic supply could be very degrading for oneself. As a strong person is basically exceptionally kind to the core, but tough on the outside, this contrast is a lucrative option for a narcissist. For the narcissists, they are lured by strong people. But strong people don’t give up and while they may seem to be drowning in the slumber they will fight back and emerge out stronger.

Related: Signs You Have A Strong Personality That Might Scare Some People

Strong people face difficulties and suffer the same sufferings as anyone else would. But the way they respond to hardships is all that makes the difference. They know how to efficiently turn adversities to virtues.

They suffer from depression and anxiety too; in fact, this is the price they have to pay for the strength. They often choose difficult jobs or partners not because they are attracted to toxic people, but because their fighting spirit, unconsciously chooses the same life scripts over and over again.

You can be strong and true to yourself without being rude or loud.  – Paula Radcliffe

Being stronger doesn’t make your life easier but it’s just that you’re prepared to take on anything that comes your way. You know how to rise again when you fall. The difficulty is but another path for a strong person, a path which is traveled by a few people but holds glorious rewards.

Just keep the lights in your heart on and no matter how dark it gets, don’t give up. Let this make you stronger to rise.