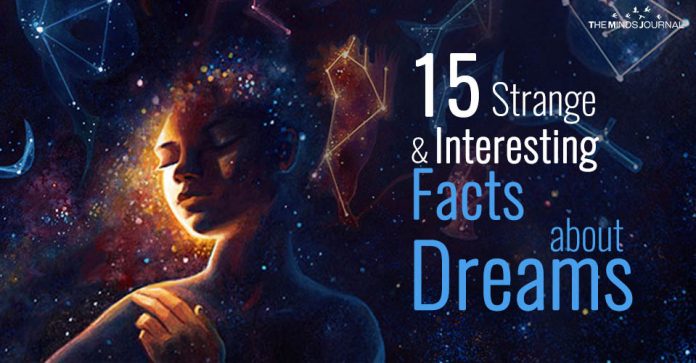 15 Strange and Interesting Facts about Dreams 5. Not Everybody Dreams in Color

A full 12% of sighted people dream exclusively in black and white. The remaining number dream in full color. Studies from 1915 through to the 1950s maintained that the majority of dreams were in black and white, but these results began to change in the 1960s. Today only 4.4% of the dreams of under-25 year-olds are in black and white. Recent research has suggested that those changing results may be linked to the switch from black-and-white film and TV to color media. If you dream about some particular subject it is not often that the dream is about that. Dreams speak in a deeply symbolic language. Whatever symbol your dream picks on it is most unlikely to be a symbol for itself. The most common emotion experienced in dreams is anxiety. Negative emotions are more common than positive ones. 8. You can have four to seven dreams in one night.

On average you can dream anywhere from one or two hours every night. Studies have been done on many different animals, and they all show the same brain waves during dreaming sleep as humans. Watch a dog sleeping sometime. The paws move like they are running and they make yipping sounds as if they are chasing something in a dream. Rapid eye movement (REM) sleep is a normal stage of sleep characterized by rapid movements of the eyes. REM sleep in adult humans typically occupies 20-25% of total sleep, about 90-120 minutes of a night’s sleep.

During REM sleep the body is paralyzed by a mechanism in the brain in order to prevent the movements which occur in the dream from causing the physical body to move. However, it is possible for this mechanism to be triggered before, during, or after normal sleep while the brain awakens. One of the greatest gifts in moving yourself forward when you feel stuck is laughter. Here are 5 reasons why laughing until your face hurts is the best medicine.
Read more
Mind and Brain

According to the Dunning-Kruger Effect, people who have little understanding about a topic, generally overestimate their capability and knowledge about it.
Read more
wpDiscuz
1
0
Would love your thoughts, please comment.x
()
x
| Reply