15 Small Things That Are Actually Big Things To Her 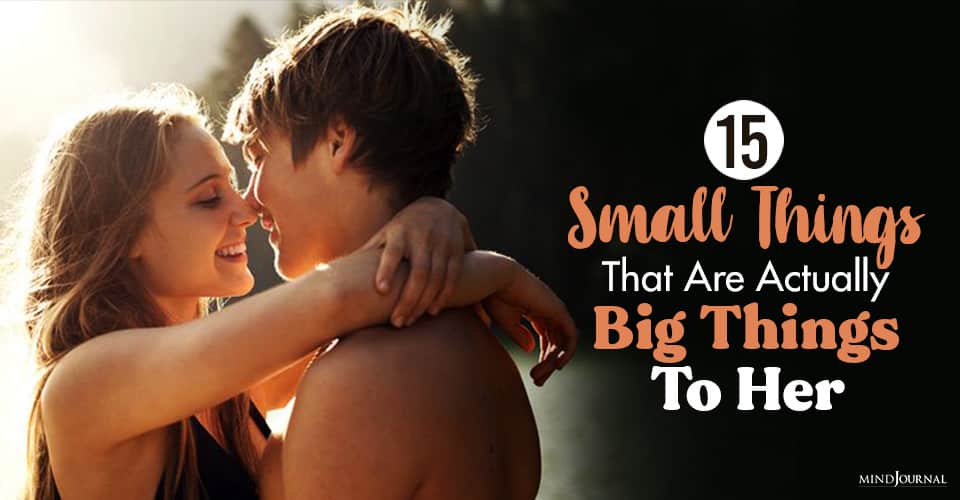 It doesn’t matter how long you’ve been together, you should never stop dating. Whether it is out to dinner or a night on the town, it is important to not let things get stale. Give her a good reason to dress up and go out.

11. Whatever you’re getting, get her one too.

Going out to grab a coffee? Getting up to get some water? Don’t come back empty handed. Even though it’s something tiny, she will appreciate your thoughtfulness.

Related: 10 Adorable Compliments That Will Touch Her Heart

The only thing worse than a guy who doesn’t give her enough attention is a guy who gives her too much attention. Sometimes she just wants to read a book or watch a trashy TV show by herself.

Respect her alone time, it will allow her to rest and reset, and she will love you for it (especially if she doesn’t have to ask).

Men are naturally problem solvers. When we hear about an issue we are compelled to attempt to come up with a suggestion or solution.

When a woman vents to you, that’s not what she’s looking for. She wants you to simply listen and at least make an attempt to understand. She doesn’t want you to give her the answer, but the support she needs to figure it out on her own.

Women understand that how you speak about those from your past is usually more of a reflection of you than it is of them.

Someday, if your relationship ends, you are basically predicting to her how you’re going to talk to your friends or your next girlfriend about her. Not very reassuring.

Dude, it’s Saturday, and you’re not doing anything anyway. If she wants to go to the mall, just go with her – but be in good spirits about it. I never understood why so many guys have a problem with this.

You get to go and help her pick out clothing that makes her look sexy, and then you get to see her wear it, later on, it’s a win-win. Just don’t be a downer while you’re there or it will do more harm than good. Oh, and offer to carry her bags. Just offer.

As Robert Brault said: Enjoy the little things, for one day you may look back and realize they were the big things.