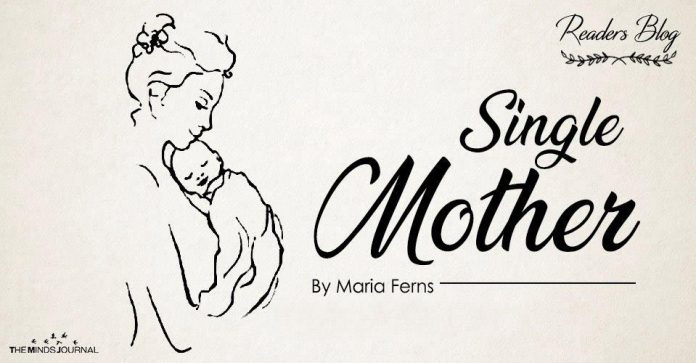 Love made them find each other,

Marriage was a bond which bought them closer.

They lived a life they dreamt about.

A year passed by and they were blessed with a baby boy, both parents managing toys.

She was busy with their son, and his Dad was always busy, with work.

No time for his baby or his beloved.

She calmed herself stating his busy, for her and their baby.

In a mall, she was with her son when she saw her beloved husband.

She walked towards him to give a surprise but turned her face in despise.

It was her husband and a woman he kissed and kissed in front of her eyes.

Tears filled her eyes, just trying to settle her face with a smile.

She put her son to sleep & waited for her husband to arrive.

She confronted him, he denied.

The bitterness of their relationship was affecting their child.

He decided to leave, his son and his beloved wife, to begin his life.

She was hurt but kept a smile deciding to live for her son with no compromise.

She knew crying wouldn’t help; she started working to support her son by herself.

As years passed her son grew older, seeing him grow made her stronger.

Her son never asked about his father, he called her “mofa” (mom and father).

He grew wise and smart.

He was kind and simple by heart.

He was naughty yet very witty.

The day he graduated he thanked his mother; for in difficult times she always stood together.

He hugged his mother and whispered in her ears; “Mofa, it’s about time you live your life; as you need a companion who would understand heart”.

She was dazed by his gesture.

Her son was her only treasure.

A woman is stronger than no other.

Being a single mother is nothing more than a pleasure!

Excellent reading this ! I… Read more »

Ending Possession The color of her eyes, the stench protruding from her pores, her voice when she spoke was raspy and monotone.
Read more
wpDiscuz
5
0
Would love your thoughts, please comment.x
()
x
| Reply