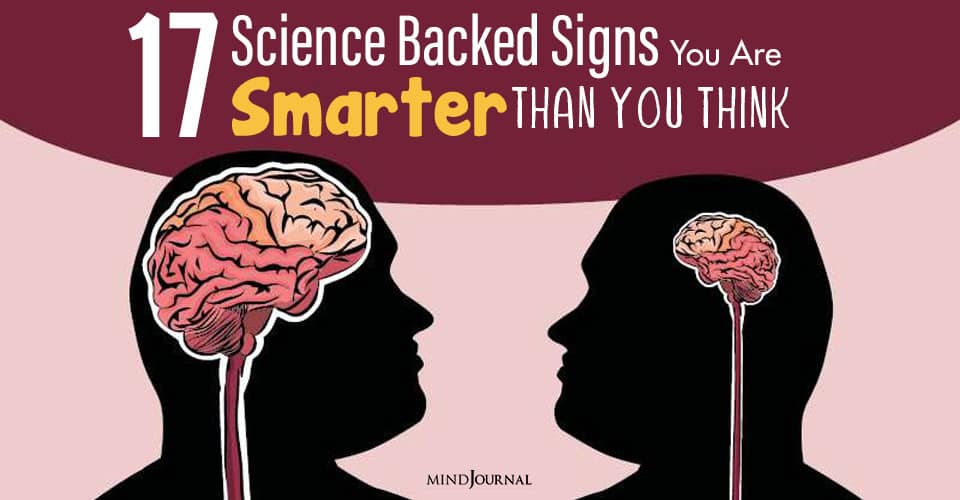 Hard to believe, right?
But, breastfeeding kids do have an advantage over children, not fed breast milk.

Researchers found that breastfed children score higher on an IQ test, provided they had a particular version of the FADS2 gene. However, there is a need for more studies to identify the exact relationship between FADS2, breastfeeding, and IQ.

Smart kids grow up to engage in binge drinking and getting drunk according to evolutionary psychologist Satoshi Kanazawa. Alcohol is an unhealthy habit! Yet scientists say that people’s intelligence is linked to the amount of alcohol they consume.

Kanazawa and his team conducted two long-term studies and found that among Americans and Brits, people who scored higher on IQ tests grew up drinking alcohol more frequently and in greater quantities than those who scored lower.

So, this may be the reason why you don’t feel smart but you actually are.

Taller people are considered to be more dominant, healthy, and intelligent, and are likely to be chosen for leadership positions. According to an evolutionary psychology perspective, people associate height with “greatness” and “dominance”, which are important traits for being a leader. Shoutout to all the tall people in the world!

Some of the tallest Hollywood celebrities are Dwayne Johnson, Jason Momoa, and Arnold Schwarzenegger. And some of the popular leaders who have a good height are – Turkey’s Recep Tayyip Erdoğan: 6 feet, Canada’s Justin Trudeau: 6 feet 2 inches, and Serbia’s Aleksandar Vučić: 6 feet 6 inches.

17. You Don’t Always Have To Try Hard

No doubt smart people are lazy but more than that they don’t always have to try so hard, according to a Vanderbilt University study of highly intelligent young people. The study investigated 2,000 people who scored in the top 1 percent of the SAT by the age of 13. Thanks to their innate abilities, they always have real-world advantages over those striving to be smart. They are highly likely to build successful careers in the medical or literary field.

If you enjoyed reading this article, leave a comment below.
Feel free to share this article with anyone who may find it valuable and helpful.