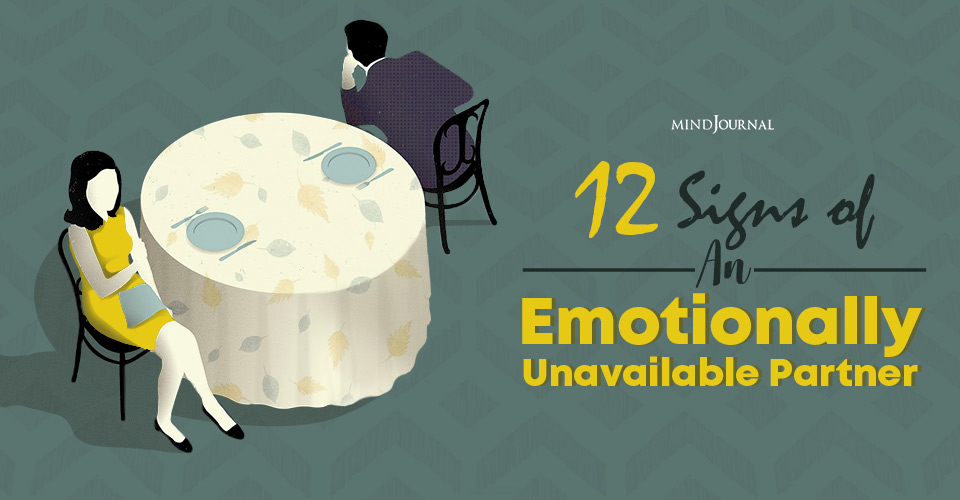 At first, some of these signs may be more obvious than others. It’s tricky: we tend to show our best selves in the honeymoon stage of a romance. It can take time for a person’s unavailability to emerge. One patient lamented, “I need a crystal ball. The first few months of a courtship, a man is so attentive, caring, passionate.”

Partially, she’s right, but it’s also true that we tend to see what we want to see. That’s why it’s eye-opening to look at a partner’s relationship history. Who he or she was previously with reveals volumes about their capacity for intimacy now.

Beware of rationalizing, “I’m different. This person would never be that way with me.”

I don’t care how mightily someone blames the blood-curdling horrors of an ex for a relationship’s demise, this person played a role too. Being able to admit that or trying to understand the reasons for making such a terrible choice is a positive sign. Playing the victim is not.

Over the years, I’ve worked with many perplexed, lonely patients to uncover why they keep holding a torch for unavailable, commitment-phobic partners and how to surrender this sabotaging pattern. Most of us aren’t purposely drawn to these kinds of people–their mixed messages combined with our particular susceptibilities, conscious or unconscious, can lure us in.

Read: 10 Signs Of Emotional Numbness and Ways To Recover

Also, it helps to understand that unavailable people rarely choose to be this way. It’s an unconscious defense against trauma or some emotional wounding of the past. Research has shown that many are afraid of being clung to or smothered which stems from having had a controlling, engulfing, or abusive parent.

Commitment-phobic men, in particular, may just prefer sex without love. They are afraid of being controlled by feminine energy, though they don’t know it or couldn’t admit it. Rather, they see themselves as macho dudes who think women always need more than they can give.

Thus, they prefer to play in shallow water, not go deep. If being in a relationship with an unavailable person feels like love to you, I urge you to look closer. Commitment phobic women also fear intimacy and want to keep a distance.

To find true love, ideally, you want to avoid getting involved with anyone who can’t reciprocate your affections. If you are in a toxic, abusive, or non-reciprocal relationship, withdraw even when your passion is strong and says “stay.”

It may feel excruciating to let go when you don’t want to or if you’re still hoping against hope that the person will change, but, as my Daoist teacher once told me, “The heart knows when it’s enough.”