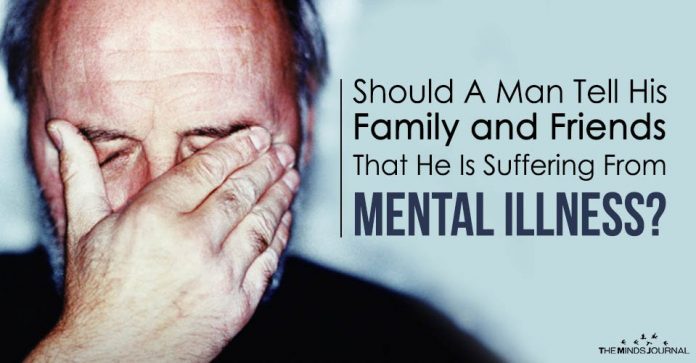 Should A Man Tell His Family and Friends That He Is Suffering From Mental Illness?

I was under the impression that the illness was degenerative and that I might not live to see my next birthday. I asked the doctor how many other people there were like me and he told me about 2.5 million people in the United States alone–that statistic today is closer to 5.5 million.

My doctor tried to calm me down and talk me through the diagnosis, but I was self-stigmatized by my new label. And then, of course, he had to remind me that I was now part of a category of people called “the mentally ill.” Oh, God. I was a lunatic, a freak, a psycho, a crack-up, and a mental case.

When I left his office on the Upper East Side of Manhattan and walked home across Central Park that snowy morning, I imagined being forced to have electroshock therapy like Jack Nicholson in One Flew Over the Cuckoo’s Nest. I persuaded myself that I was overreacting, taking this too far. That could never happen to me. But actually, I wasn’t taking it too far. Less than three years later I found myself in the operating room of a psychiatric hospital in Manhattan, lying on a gurney with electrodes attached to my head and receiving electroshock treatments, 200 volts of electricity running through my brain.

The stigma first hit me in the outside world with a little help from the written prescription my doctor gave me.

It was filled out for medications thought to control my bipolar. On seeing it, my own neighborhood pharmacist remarked, “Your doctor’s putting you on all of this medication? Are you okay?” I didn’t respond. I paid for my four prescription drugs and left the pharmacy wondering exactly what he meant by “all of this.”

Was I some sort of “mental case” because I was now taking four different medications? Did the pharmacist know something about my condition that I didn’t know? And did he have to say it in such a loud voice, just hours after my diagnosis? No, he didn’t. That was unkind. It seemed that even the pharmacist had an issue with mentally ill patients and trust me, mentally ill patients in Manhattan were the bread and butter of his business.

But I still had to tell people about my diagnosis. My girlfriend of seven years had already broken up with me (in part due to my erratic behavior) so I knew I had to approach my family and friends if I wanted to support and help.

My biggest challenge, in my head, was that I couldn’t even draw a picture of this “thing” called bipolar disorder. I looked good. In fact, I looked really good. Would anybody believe I was mentally ill?

I waited a week until I got up the nerve to ask my parents to dinner. I took them for a meal at one of their favorite restaurants. They seemed suspicious. Did I have something to tell them? They automatically assumed I was in some sort of trouble. I quickly spilled the beans. “Mom, Dad, I’ve been diagnosed as bipolar by a psychiatrist,” I said. There was a long silence. It’s as if I’d told them that I had two months to live Interestingly, they had the same reaction that I had when my doctor told me.

Next, a million questions: “Are you sure?” “Where did it come from?” “What’s going to happen to you?” Although they didn’t come out and say it, they seemed concerned that I was going to lose my mind. Oh, God. Their son had a mental illness. Was I going to end up living with them for the rest of their lives? And of course, they wanted to know if it was genetic. My telling them that it was didn’t exactly make for a pleasant conclusion to the dinner. Not only were they now faced with the stigma that their son had a mental illness, but the stigma that mental illness ran in the family.

With friends, it was easier to break the news. They seemed to know more about bipolar disorder and were supportive of my getting well and staying on a medication regimen. But all hell broke loose when medication didn’t manage my illness and I opted for the last resort, electroshock therapy (ECT).

Are you someone who suffers from OCD or Obsessive-Compulsive Disorder, and you are trying very hard to tackle this for a long time?
Read more
Coronavirus